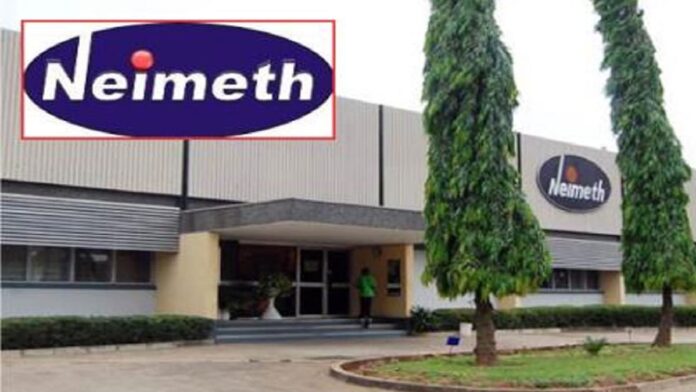 Neimeth to Pay Dividend after 9-Year, But WSTC Says Share is Overpriced

Neimeth Pharmaceuticals International Plc is expected to pay its first dividend in 9 years but analysts at WSTC Securities Limited think that the market has priced in future growth into its stock price.

As a result, analysts advised a sell despite the fact that earnings prospect appears strong, forecasts actually project better earnings performance in 2021.

Operating profit, however, declined by 5%, resulting from an exchange loss incurred as Neimeth engaged importation of raw material.

Meanwhile, despite a 12% year on year decline in finance costs, profit before tax also fell by 2% from ₦304 million to ₦297 million.

“The impact of the exchange loss weighed heavily on bottomline”, analysts at WSTC Securities said in an equity report.

“We note that the dividend declaration was the first in the last nine years. The Company last declared a cash dividend in 2011”, WSTC Securities said.

“We note the business’s prior operating challenges in generating revenue without having to push credit sales significantly.

“The implication of the credit policy resulted in persistent impairment losses on receivables.

“In 2015, the management changed the policy on sales and adopted a cash-backed revenue generation approach”.

It was however noted that double-digit revenue growth recorded in 2020 reflected the revitalisation of the Company’s Salesforce.

The Pharmaceuticals division, which contributed 87% to total revenue, recorded an 8% year on year growth in 2020.

But growth recorded in the Animal Health division hit the rooftop at 310% year on year.

WSTC Securities stated that effectively, the Animal Health division drove 60% of the increase in total revenue in 2020.

It was noted that the Pharmaceuticals division grew on the back of improved market penetration and increased demand, particularly as COVID-19 rampage the financial year 2020.

Analysts explained that Neimeth incurred an exchange loss during the year, which dampened the gains achieved on the topline.

Recalled that during the year, the Central Bank of Nigeria (CBN) adjusted the exchange rate upwards on two different occasions.

First, due to the nation’s need to protect the local currency, CBN adjusted the official exchange rate from ₦306/$1 in March 2020.

In the parallel market, however, the exchange rate was significantly higher as it traded at ₦470/$1.

WSTC explained that the upward movement in the exchange rate during the year resulted in a ₦189 million exchange loss for Neimeth Plc, given its exposure to foreign currency.

The Pharmaceuticals Company incurred a material foreign-denominated cost, in the form of raw materials imports.

“We discovered that operating profit could have grown by 41% when we discounted the FX loss incurred”, WSTC Securities stated.

In 2020, the Group obtained ₦3.31 billion loan during the financial year, representing a combination of loans from the CBN and Bank of Industry (BoI).

The increased debt raised the Company’s financial leverage significantly to 5.05x from 2.57x a year earlier.

With increased financing, Neimeth Plc invested in fixed assets as Plant, Property and Equipment grew by 60% from ₦758 million in 2019 to ₦1.21 billion in 2020.

It would be recalled that in recent time, Neimeth announced that the Board agreed to a ₦5 billion equity capital raise.

However, the Board will present the resolution for shareholders’ approval at the scheduled Annual General Meeting on March 9, 2021.

“In our view, we posit that the capital raising efforts (debt and equity) of the Company signals that it is making active investments to tap growth opportunities, particularly in the Animal Health business segment”, WSTC posited.

Analysts said this was mainly attributed to increased debt financing during the period as the company builds on new growth agenda.

WSTC Securities said it has raised growth expectations on Neimeth, and analysts said they are expecting the Company’s topline growth to sustain in 2021.

“We forecast an 18% revenue growth in 2021, expected to be driven by double-digit growth in both the Pharmaceuticals and Animal Health divisions”, the firm stated.

In addition, analyst are expecting to see continued market penetration efforts by the Pharmaceuticals Company.

The investment firm projects a 40% operating profit growth in 2021, mainly due to non-expectation of a significant FX loss in 2021.

WSTC Securities estimated a ₦1.59 fair value company’s share. However, it noted that at ₦1.98 market price, the stock trades at a 20% premium to its fair value.

Meanwhile, the firm said its ₦0.09 dividend projection implies a 4% dividend yield, altogether, based on estimates, the stock offers a -15% total return.

“The implication of this is that we believe that the growth prospects of the stock has been priced in.

“We recommend a SELL and expect to see a price reversal in the near to medium term”, WSTC Securities stated.