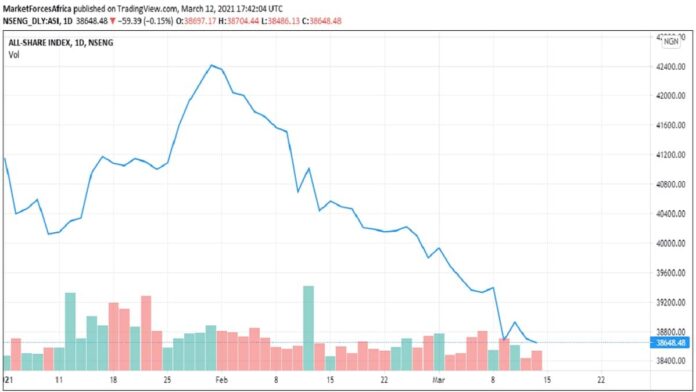 Stocks Prices drop as uncertainty over Naira assets fuels sell-off on Friday with year to date losses stretching above 4% despite initial rally early in the year.

After negative outing recorded yesterday, the equities segment of the Nigerian Stock Exchange recorded yet another loss amidst sell-offs in bellwether stocks.

Analysts said today’s losses stemmed mostly from sell-offs on some tier 1 banking stocks, together with MTNN which shed 125 basis points at the close of the market.

The NSE All-Share Index dipped by 15 basis points, taking the cumulative losses for the week to 1.73% above previous week.

Consequently, the year to date loss rose to 4.03%, while the stock market capitalisation declined to N20.221 trillion on Friday.

Chapel Hill Denham said performance across its coverage universe was mixed as 2 of 5 under the firm’s coverage indices closed in the red terrain.

The preceding completely offset the gains recorded in NSE consumer goods and NSE insurance, both of which notched higher by 103bps and 132bps, respectively. NSE industrial goods closed flat.

The market’s activity was broadly bullish, with the total volume rising significantly by 73.58% to 294 million.  Meanwhile the total value traded similarly rose by 77.84% to N3.770 billion.

In the money market, financial system liquidity remained under pressure today, opening in deficit of N34.2 billion from a surplus of N64.0 billion yesterday.

Next week, funding pressures will likely ease, due to OMO maturities estimated at N104bn, and bond coupon payments totaling N142.09bn.

In the bills market, the NTB and OMO benchmark curves were unchanged at an average of 2.53% and 6.73% respectively.

However, the benchmark bond yield curve compressed by an average of 6bps to 9.93%.