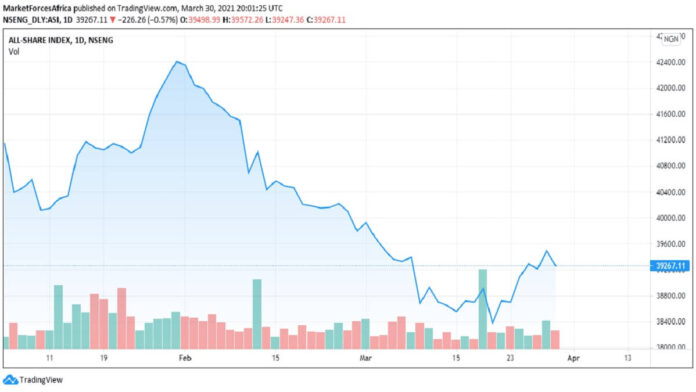 As a result of sell-offs, the Nigeria’s equity benchmark index gave up some of the gains witnessed in yesterday’s session, following losses across some heavyweight names. Investors lost N118.4 billion due to sell-offs in large cap stocks.

So, the NSE All-Share Index dipped by 57 basis points to 39,267pts. Against that backdrop, year to date loss rose to 2.49%, while the market capitalisation declined to N20.545 trillion.

Chapel Hill Denham said in a market report that performance across its coverage universe was mixed. Precisely, analysts at the firm said only 2 out of 5 coverage indices closed in the red terrain.

The market’s activity was broadly bearish, with the total volume moderating by 35.63% to 336 million, while the total value traded also declined by 69.31% to N3.269 billion.

In the bills market, discount rates on the NTB and OMO benchmark curves eased by an average of 6 basis points (bps) and 5bps to 3.82% and 6.10% respectively.

Given the hawkish tilt of the MPC at the committee meeting which held last week, we expect the duration apathy in the bond market to persist over the near term, Chapel Hill Denham said.

Recalled that the last auction cleared at 2.0%, 3.5% and 7.0% respectively as analysts expect the upcoming auction to clear slightly higher.

In the Investors and Exporters Window, the Naira strengthened further against the USD, albeit marginally by 3bps or 13 kobo to 409.00. In the parallel market, the local currency weakened by 1.00 or 0.2% against the USD to 485.00.

External reserves maintained the recent upward trend, strengthening marginally by 0.6% above the previous week to US$34.8 billion.