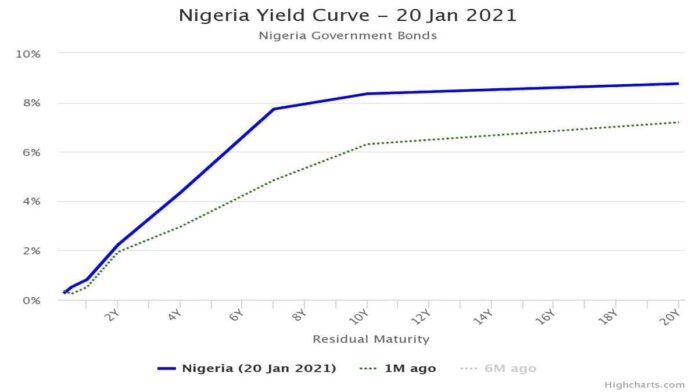 As a result, funding rates rose mildly but remained at low single digits.

“We expect liquidity to remain buoyant in the near term, at least until the bond auction settlement on Friday”, the firm stated.

Investors remained cautious in the secondary market with bid-ask spread noticeably wide, as the Bond primary market auction was underway.

Notably, at the short end of the curve, the Nigerian T-bill benchmark curve expanded while the OMO curve was flat an average of 0.64%.

In the bond market, yields also expanded marginally by an average of 1bp across the benchmark curve to 6.95%.

Chapel Hill Denham said due to investor demand for high yields, the DMO allotted only N122.36 billion at the open auction,

However, the DMO issued another N48 billion as non-competitive allotment, bringing the total sale to N170.36 billion.

“Following the greater clarity from the auction, we expect bid-ask spread to narrow tomorrow”, analysts at Chapel Hill Denham stated.

In the currency market, the Naira weakened marginally against the United States dollar at the I&E Window by 0.21% or 82 kobo at N394.17.

However, the local currency traded flat against the greenback in the parallel market, exchanging for N475.00.

External reserves sustained its uptrend, up 3.0% in January, to US$36.44 billion (on 18 January 2021), reflecting the impact of foreign currency loan in-flows.