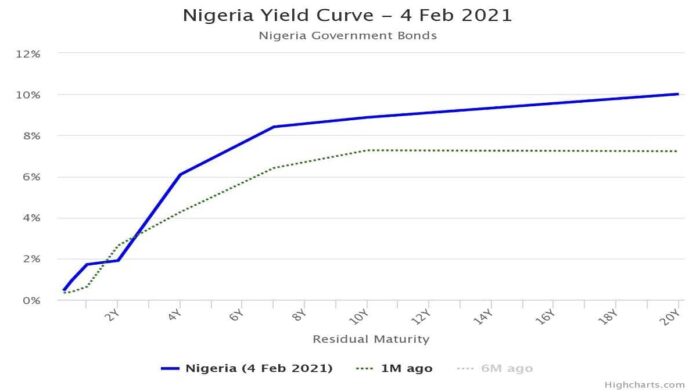 In a note, analysts at Greenwich Merchant Bank Limited said albeit, the market witnessed buying interest on long dated bills.

In the money market, funding pressures persisted due to tighter liquidity squeeze.

Thus, declining liquidity exerted pressure on interbank rates, with the Open Buy Back and Overnight rates rising by 125bps and 150bps to 12.50% and 13%, respectively.

It would be recalled that Open Buy Back printed at 11.3% on Wednesday while overnight rate was priced at 11.5%.

“Without any significant inflow coming in the next few days, together with FX retail auction on Friday, funding pressure will likely persist, thereby giving way for further uptick in rates”, Chapel Hill Denham noted.

Trading activities in the fixed income market was bullish on Thursday due to sustained interest in the long day to maturities (DTMs) bills.

However, while yield on T-Bills rises, the Open Market Operation curve closed flat at an average of 2.08%.

In the bond market, yields dipped by an average of 2bps across the benchmark curve to 8.69%, due to downward repricing.

Meanwhile, the intermediate end of the curve closed flat at 8.83%.

In the currency market, the Nigerian local currency, Naira, weakened marginally against the United States dollar in the I&E Window by 0.54% or N2.13 to 397.63.

On the other end, parallel market premium remained sizeable, as the dollar-naira pair traded flat at 480.00 in the segment.