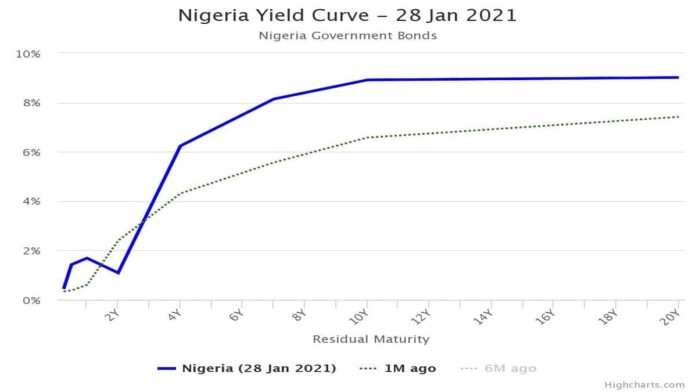 The Nigerian Treasury-bills recorded a jump in average yield to a 3-month high as the bear rules in the fixed income market on Thursday.

Market pattern indicated that the bears returned to the T-Bills market, triggering a surge in yields following a previous muted session, and the Primary Market Auction (PMA) on Wednesday.

Chapel Hill Denham stated that increased in yield was in response to the outcome of the Nigerian T-Bills auction yesterday, wherein the CBN raised auction stop rates by an average of 28 basis points (bps) to 1.28%.

Specifically, yields firmed up by 50bps to an average of 1.1% on heavy selloffs that dominated trading activities.

In the OMO market, activities closed flat with the average yield settling at 1.6%, even as the CBN sought to mop up NGN150.0bn from the system via OMO sales.

Elsewhere, the Bond market continued its bearish march, despite the pockets of positive sentiment (-6bps) observed on the short end of the curve.

“We expect bearish sentiment to persist even as the week wraps up”, Greenwich Merchant Bank stated.

Similarly, analysts at Chapel Hill Denham said they expect the aggressive selling in the bond market to moderate in the short term, following the dovish bias expressed by the CBN at the last MPC meeting.

“However, over the medium term, we expect yields to normalise in the process of re-engaging Foreign Portfolio Investors (FPI)”, the firm added.

In the parallel market, the exchange rate traded flat at N478.00 as the external reserves stood at US$36.43 billion.