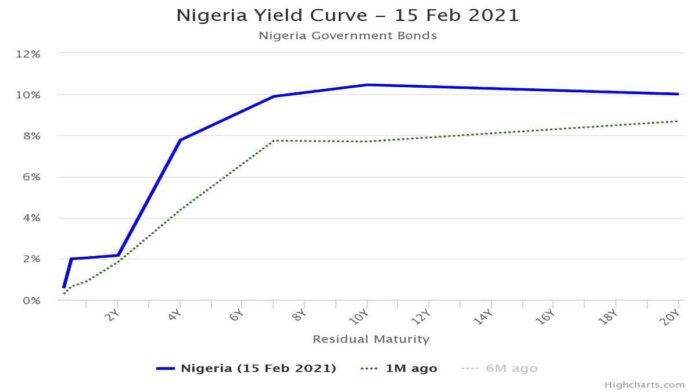 In the fixed income market, average yield on the Nigerian Treasury Bills (T-bills) rise as Naira depreciates to ₦409.67 to a dollar at Investors and Exporters Window.

It appears that the monetary policy authority is losing the battle for the soul of the local currency amidst foreign inflow scarcity.

On Monday, the T-bills market opened the week bearish albeit on a soft note, following selloffs across the intermediate to long end of the market.

Analysts at Greenwich Merchant Bank said the bearish stance resulted in a 2 basis points (bps) rise in yields to average 1.5%.

“This week, we expect that funding pressure might intensify as we do not expect any significant inflow into the system, asides maturing OMO bills worth ₦260.2 billion”, Greenwich stated.

Similarly, yields in the open market operations (OMO) market dipped 23bps to 6.5%, following pockets of buying interests across the tickers.

The bullish turn trails the move by the CBN last Thursday to maintain stop rates at its OMO Primary Market Auction (PMA).

In the Bond market, the average yield expanded by 6bps to 9.1%.

Across the curve, the biggest yield rise was seen at the belly (+13bps) of the curve, with the long end trailing (+5bps).

Conversely, investors positioned in instruments at the short end (- 2bps).

“We expect an uptrend in the headline inflation rate for January to be announced in the Consumer Price Index (CPI) report tomorrow.

Elsewhere, the Naira was firm in the Parallel foreign exchange market at ₦473.00/USD, unchanged from Friday.