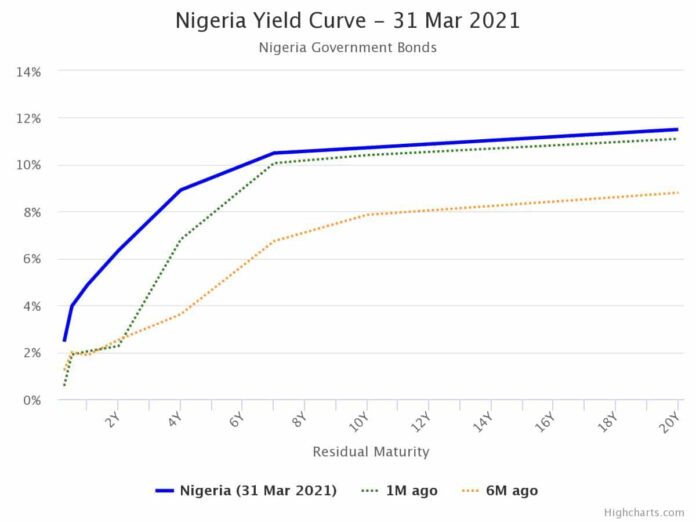 Notwithstanding, funding pressures increased, as a result of primary market auctions (OMO and NTB). As a result, the Open Buy Back (OBB) and Overnight (O/N) rates increased to 8.25% and 9.25% from 6.33% and 7.17% respectively.

“We expect funding pressures to increase in subsequent sessions”, analysts at Chapel Hill Denham said in a market report.

Specifically, in the bills segment, discount rates on the T-Bills and OMO benchmark curves closed flat at 3.82% and 6.10% respectively. Similarly, bonds closed largely flat, with the benchmark yield curve unchanged at an average of 10.42%.

Chapel Hill Denham said given the hawkish tilt of the MPC at the committee meeting which held last week, the firm expects the duration apathy in the bond market to persist over the near term.

Meanwhile Naira strengthened further against the United States dollar at the Investors and Exporters Window, albeit marginally by 8 basis points or 33 kobo to 408.67. In the parallel market, the Naira traded flat against the greenback to 486.00.

Notably, the NSE All-Share Index dipped by another 57bps to 39,045.13pts. Against that backdrop, year to date loss rose to 3.04%, while the market capitalisation declined to N20.429 trillion.

Chapel Hill Denham said performance across its coverage universe was mixed, albeit with a bullish bias. Precisely, only 2 of 5 of under its coverage indices closed in the red terrain.

The NSE banking and NSE industrial goods indices dipped by 84bp and 3bps, respectively. The foregoing masked the gains recorded across the NSE insurance, NSE consumer goods, and NSE oil & gas, all of which rose by 222bps, 39bps, and 2bps, respectively.