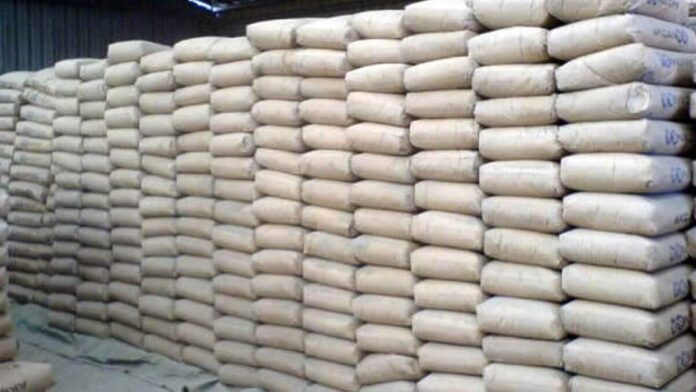 The increased sales was partly driven by improved capital expenditure by Nigerian government and border closure while operators were able to adjust prices.

In August 2019, Nigerian government put her land border under lock to protect local industries from infiltration of foreign products that was putting pressure on pricing as home producers lack comparative production advantage.

Unintended consequence of the Federal Government’s border closure policy is the rising prices, with inflation rate rising month on month – though authority believe rising price level is due to supply chain shock.

Specifically, inflation has spiked for 18 consecutive months due to lower competition among local manufacturers, with food inflation contributing significantly to the uptrend.

Dangote Cement’s spokesman, Anthony Chiejina told MarketForces Africa that the company has not increase price since 2019.  According to him, middlemen are the culprits in the price increment currently at play in Nigerian market.

Of the combine revenue, Dangote Cement local sales accounted for some 62% of the entire market, while Lafarge WAPCO and BUA Cement sales combine accounted for 38%.

In a report, CSL Stockbrokers said following the removal of movement restrictions in Q3 2020 and the resumption of economic activities, the impact of reopening was evident in the financial performance of the three major players in the cement industry.

Specifically, Dangote Cement recorded a 13% year on year increase in sales volume for its Nigerian operations while Lafarge and BUA Cement reported growth of 6% and 13% respectively.

CSL Stockbrokers said the growth across the board reflects the full reopening of the economy as many residential and commercial projects began operations fully.

Recall that the restrictive measures put in place in the second quarter of 2020 dealt a huge blow to the revenues of two -save for BUA Cement – major cement players.

Analysts cited that the Central Bank of Nigeria Manufacturing PMI showed that demand for new orders in the cement subsector slowed to 63.6 points at the end of Q2-2020 from 70 points in Q1 2020.

However, demand for real estate investments which improved amid favourable weather conditions and a low interest rate environment led to increased demand for cement.

The rise reflected in the real estate sector evidenced by the posted recovery of 2.81% year on year as of Q4 2020, CSL Stockbrokers explained.

Furthermore, it noted that there was an increased level of government spending on capital projects as the sum of N1.74 trillion was spent in 2020, which is slightly below the budgeted capital spending of N1.96 trillion and translates to a performance ratio of 89%.

This indicated a strong capital intensity in the fiscal year especially when compared with N1.21 trillion expended on projects, translating to 41% of the budgeted sum of N2.93 trillion, in 2019.

“Looking ahead, we expect moderate growth in the cement sector to be supported by the government’s capital spending.

“However, the pressured household income amid the fast declining purchasing power leaves the possibility of a muted demand for housing projects.

“Furthermore, we anticipate more price discounts from the market players to drive volume growth. That said, we believe for the sector’s potentials to be fully attained, demand would need to be boosted by improved consumer spending”, CSL Stockbrokers stated.

Dangote Cement’s Nigerian operations during the period sold 15.9 metric tonnes (Mt) for the full year 2020, compared with 14.1Mt in 2019. This includes both cement and clinker sales, which implies a 12.9% growth for the full year 2020. As a result, Dangote Cement revenues for the Nigerian operations increased 18% to N720 billion, owing to demands in the domestic market.

Sales expanded 8.3% year on year from N212.999 billion in 2019 to N230.573 billion. Despite the pandemic spreads, rapid capital expenditure disbursement from the government as well as a mini-resurgence in commercial and residential real estate supply supported a rebound in cement demand in the second half of the year.

Analysts said the miss was actually driven by a slower-than-expected Q4-2020 volume rollout at 1.1 million MT as against 1.2 million MT in Q4-2019 and Vetiva estimate of 1.4 million MT), amidst manufacturing issues at the Ewekoro and Mfamosing plants in Q4 as well as the total shut down of Ewekoro Line 1 for upgrades at the end of September.

Meanwhile, supported by about 10% year on year jump in average revenue per tonne to ₦43,643, WAPCO topline expanded to ₦230.6 billion.

Analysts said this outlook is supported by the expected reopening of Ewekoro Line 1 in second half of 2021 and the potential completion of debottlenecking at Ashaka (a potential 0.25 million MT capacity boost).

In the audited report summited on the Nigerian Stock Exchange, BUA Cement revenue swelled up 19.3% to N209.443 billion from N175.5 billion in the corresponding year 2019.

The cement company revved up topline performance as volume expanded from 4,501 kiloliters (KT) to 5,100 KT in the financial year from corresponding period in 2019.

N230.569 Billion – Lafarge : Lafarge Africa Gets its Groove Back after SA Divestment

WAPCO Established for the business of cement production typically has three major business operations within Nigeria which are the South-West operations, the Southern

Nigeria operation and the Northern Nigeria operation. Established for the business of concrete and aggregates. This segment has operations currently in Lagos, Abuja, Port-Harcourt, and Ewekoro and is expected to spread to other states of Nigeria in the near future.

Established for the business of admixtures and other solutions. Admixtures are chemical compounds added to concrete to modify its properties.