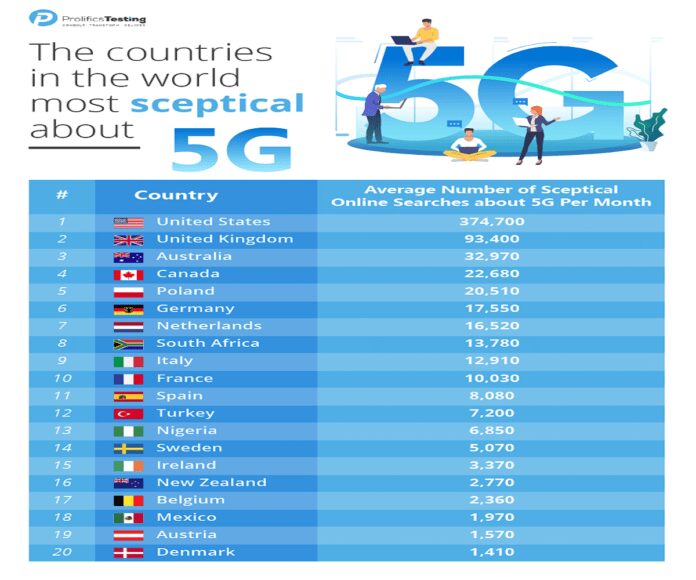 Ranked 13th on the list, Nigerian comes behind the United States, Australia, Canada, United Kingdom and others.

While noting that 5G seems to be coming to every town and city at a very fast rate, Prolifics Testing explains that with this rapid growth comes worries and misunderstandings for some individuals.

“With many companies integrating 5G into their development process, it’s safe to say that this telecommunications technology is here to stay”, it added.

The software testing firm said it conducted thorough research into the online searches surrounding the topic within different countries.

The report says there are 6,850 online searches a month by Nigerians concerning possible negative implications of 5G technology.

The United States rank as the most skeptical country in the world about 5G deployment with an average of 374,700 tentative online searches per month.

In addition, United Kingdom (93,400) and Australia (32,970) are among the other countries where there are over 30,000 doubtful online searches regarding 5G each month.

“Coming in at number one in our rankings of the countries who are most sceptical about 5G is the United States, with a staggering 374,700 searches per month.

“This is four times more than the United Kingdom which takes second place, where natives searched for questions like ‘Is 5G safe?’ 93,400 times per month.

“Perhaps this steep drop can be down to the BBC calming some of the citizen’s fears”, it said in the report.

The firm explains that 5G is one of the pinnacle new technologies that is set to revolutionise everyday life.

Prolifics Testing says 5G is driven by its core benefit of super-fast low latency internet, has the strong potential to unlock the full capabilities of other advanced technologies like augmented reality and Internet of things (IoT).

“Despite these positive credentials, many are still cynical about 5G”, the report said.

Interested in technology trends, Prolifics Testing utilised online analytics tool Ahrefs to discover which countries in the world are most sceptical about 5G based on their online searches in relation to 5G.

It then classified and grouped consistently recurring Google searches by individuals on 5G such as ‘is 5G dangerous?’, ‘is 5G safe?’, ‘is 5G harmful?’, ‘does 5G pose health risks?’ and ‘does 5G cause/spread coronavirus (Covid-19)?’ as sceptical online searches about 5G.

“In second position is the United Kingdom, where there are 93,400 online searches a month by Brits doubting and questioning various aspects of 5G.

“Nigeria is in 13th place, as there is an average of 6,850 dubious online queries about 5G per month by worried Nigerians”.

It also noted that in Africa, there are 13,780 online searches a month by South Africans (eighth place) concerning the possible negative implications of 5G technology.

At the other end in 20th place is Denmark, where there is an average of 1,410 sceptical online searches by Danes relating to 5G each month.

It discovered that New Zealand residents make just 8,650 searches per month on average – 305,350 less searches than the US in first place.

Belgium places in second (but still quite a jump from New Zealand), as Belgians search for ‘5G’ 13,200 times on average per month.

The countries that are not so bothered about questioning what 5G is and how it works are the Netherlands and Denmark are tied.

With equal searches, these two Nordic countries searched ‘what is 5G?’ 1,000 times per month on average.

Ireland made 130 more searches than the Netherlands and Denmark, as residents make an average of 1,140 searches a month on Google.

This could either indicate that Irish citizens already know the answer, or are not as suspicious of 5G as other countries when it comes to the effects of the technology.