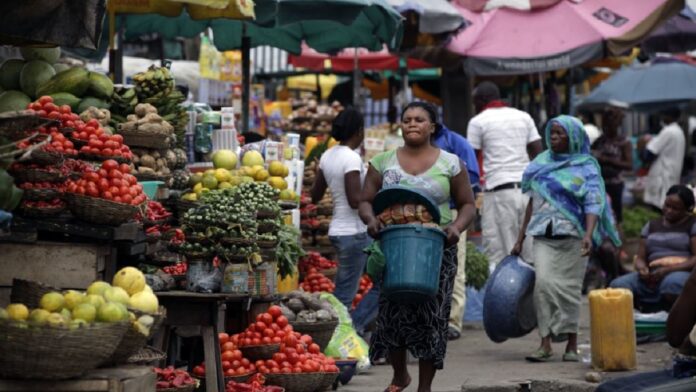 Inflation Rate to Dip Despite Price Pressures on Consumers Goods

However, following a five consecutive month disnflationary trend, the estimated slowdown comes against reality on the ground in Nigeria as households groan under increased prices of basic items.

‘Nigeria’s macroeconomic data differs greatly from reality in the local markets and among households including corporates as well as other private sector investors that interface with people’, a development economist from a leading University in Nigeria said in a chat.

The local markets continued to thrive under the steep consumers’ goods prices amidst the global energy crisis. Gas, Kerosene prices have seen a steep increase with projections showing a further rise in the offing.

Prices of food items remain expensive for households, though petroleum pump price has remained subdued as the government continues subsidy payments but this hasn’t help logistic costs of companies.

The slowdown in headline inflation rate for the country is attributed to the base effect in 2020 when productivity activities were grounded. ‘The figure, including gross domestic products growth flatter Nigerian government, it is automatic positive trajectory coming from weaker position’, analysts told MarketForces Africa.

In a report, Meristem Securities is projecting a 16.60% headline inflation rate for September, translating to a 41 basis point lower than the 17.01% reading in August 2021.

According to the firm, in advanced economies, consumer prices keep north. As the supply deficit widens for crude oil and gas commodities, energy prices are also skyrocketing, thus prompting sectors to cut back on services while transferring the additional costs to consumers.

In August, purchasing manager index (PMI) data declined for advanced economies as the US reported a retraction in service PMI to 61.7points from 64.1 points in July, the firm said.

Similarly, the report noted that in the Eurozone, service PMI, which is also Europe’s largest sector declined, though slightly to 59 points from 59.8 points reported in July.

As energy prices shoot upwards to record high in the past month, the gradual reopening of economies has triggered a demand surge which is now impacting the supply chain globally, thus resulting in logistic backlogs, Meristem said.

Based on this, consumer prices are trending sharply upwards which in turn might weigh on economic gains achieved so far.

Fitch Ratings however said that central banks in the frontier markets are tackling rising inflation pressures with rate hikes, to stem the possibility of a run over in consumers’ price index amidst disruption.

Nonetheless, Meristem Securities explains that some countries are recording a disinflation, though still above the threshold.

In the United States (U.S), inflation figures moderated to 5.3% from 5.4% in July for the first time since October 2020 amidst taper tantrums.

Meristem Securities said while this buttresses the Feds view of inflationary factors being transitory, the committee hinted at a tapering of its asset purchase program soonest as against rising interest rate.

It noted that a different scenario is playing out in the Euro-zone as prices continue to overshoot sharply above target, reaching a 13-year high in August to 3.2% year on year from 2.5% in July.

Although the European Central Bank mentioned a slow down to its Pandemic Emergency Purchase Programme, the investment firm expects imminent monetary tightening especially if the current trajectory of prices lingers.

In Nigeria, it said core inflation should continue to moderate, stated that post-harvest supplies of staples food such as Maize, Yam and Rice are beginning to slow the pace of overall price growth.

Based on a selected food price watch released by the National Bureau of Statistics in August, prices of Maize, Yam and Rice (both local and imported) declined by 1.90%, 1.05% and 0.79% month on month respectively.

However, products such as dairy products, wheat flour and eggs are still on the rise, especially in the Southeastern region.

For core inflation, analysts at Meristem Securities expect the moderation which began in August to persist given the high index base of the previous year.

While the FX rate remains relatively stable in the Investors and Exporters foreign exchange window, it suspects rates are still pressured in the parallel market based on the CBN clamp down on the supply of FX to BDC.

Nonetheless, the growing FX accretion to the reserve is likely to improve FX liquidity, Meristem said. It added that other factors such as rising crude oil prices made no impact on PMS pump prices, which have remained the same since its last revision in November 2020.

Analysts said they are expecting food inflation to retract slightly downwards to 19.57% year on year from 20.31% year on year in August 2021 while overall headline inflation is projected to moderate to 16.60% in September. #Inflation Rate to Dip Despite Price Pressures on Consumers Goods