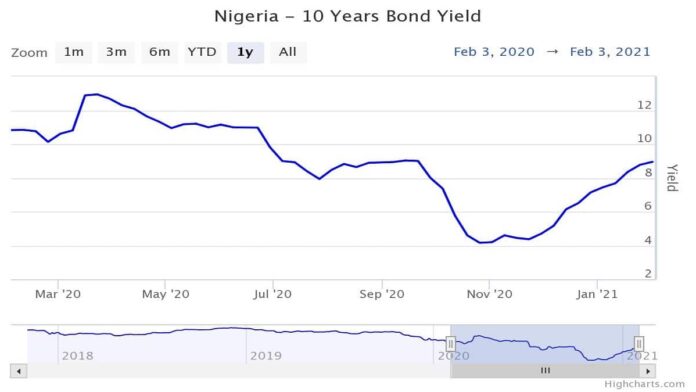 At the front end of the curve, discount rates across the Nigerian Treasury Bills benchmark curve eased by an average of 21 basis points (bps) to 0.97%.

Chapel Hill Denham attributed the development to a renewed interest in intermediate and long date to maturities (DTMs) bills.

It would be recalled that fixed income market investors had recently show apathy towards long dated bill as they scramble for higher returns.

However, the open market operations (OMO) curve closed flattish at an average of 2.08%.

Greenwich Merchant Bank said, “Informed by the trend this week, we posit that funding rates might remain elevated, should apex bank mop up liquidity in subsequent sessions”.

In the bond market, yields moderated by an average of 4 bps across the benchmark curve to 8.71%.

In the currency market, the Nigerian local currency, naira, weakened marginally against the US dollar in the Investors and Exporters Window by 0.13% or N0.50 to 395.50.

Despite rising oil prices, parallel market premium remained wide, as the naira-dollar pair traded flat at 480.00 in the segment as external reserves stood at US$36.20 billion.