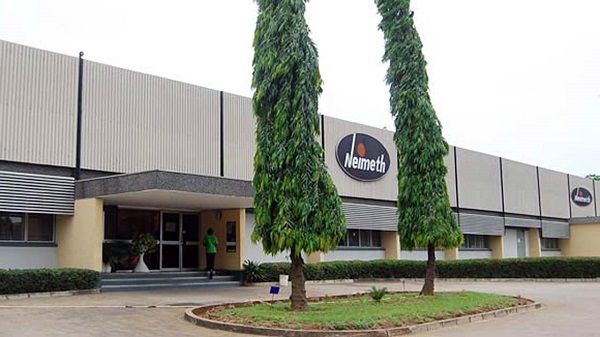 Amid rising cases of COVID-19, Neimeth Pharmaceutical Plc stock rallied in the past weeks, though it has also dropped having gained more than 45% in a week.

In the Nigerian Stock Exchange, the pharmaceutical company’s stock actually led the gainers chart in the month of May, 2020.

After the close of trading session yesterday, Neimeth traded at ₦1.71 as it market capitalisation settled at ₦3.247 billion on 1,899,157,108 outstanding shares.

Due to ravaging impacts of COVID-19, analysts’ consensus estimates are quite bias in favour of potential earnings growth in the healthcare and pharmaceutical sectors.

Despite this, equity research analysts at WSTC Securities Limited maintained sell rating on the company’s stock, on account of persistent impairment on receivables.

For Neimeth downgrade, relative inconsistency in top and bottomline growth were among the downside risk cited by analysts.

Of a particular importance to the fact behind analysts estimate is the company’s negative retained earnings.

Analysts believe that at the current earnings level, it could take three to four years for Neimeth Plc to be able to clear the deficit, and pay dividend.

“However, owing to our estimated increase in net debt, we expect free cash flow distributable to equity holders to be negative in 2020”, analysts explained.

In its estimates, WSTC Securities said it expects Neimeth revenues to grow by 5% year on year in 2020.

At the same time, the financial service firm forecast the Pharmaceutical company profit after to expand by 13%.

“Our bottomline growth expectation is anchored on sustained operating efficiency by the Company”, WSTC stated.

2019 Performance – The Consolidation and Stability

Explaining further, analysts stated that a notable development was the 95% decline in impairment losses on trade receivables from ₦188.82 million in 2018 to ₦8.85 million in 2019.

“In prior periods, the Neimeth worked a five-year program to minimise its impairment provision on receivables.

“The performance of the company in 2019 reflected the success achieved in that regard”, analysts at WSTC Securities explained.

WSTC said the profit recorded in 2019 represented the highest figure reported by the Company, from as far back as 2012.

WSTC Securities said while the Company sustained its cost efficiency, which was reflected in the 3% decline in operating expense from ₦256.69 million in Q2’19 to ₦249.59 million in Q2’20, the decline in gross margins took its toll on bottomline.

Neimeth Plc relatively strong performance in Q1’20 made up for the decline in earnings in Q2’20.

Notably, the first two quarters were typically the weakest for the Company, and majority of its earnings were generally recorded in the second half of the financial year.

2014 was quite challenging for the Pharmaceutical Company. The analysis shows that Neimeth’s revenue declined by 19% from ₦2.02 billion in 2013 to ₦1.63 billion.

“At the time, the management attributed the decline to the Company’s inability to import some key machines.

“This resulted in a slowdown in production activities during the financial year.

“Due to slower production activities, the Company recorded a significant decline in most of its top brands such as Pyrantrin and NCP”, analysts at WSTC explained.

Analysts explained that the slower decline in cost of sales relative to revenue resulted in a 30% decline in gross profit from ₦1.06 billion in 2013 to ₦753.96 million in 2014.

Tough business environment had pushed overheads but the management had struggled to curtail operating expenses.

Analysts at WSTC stated that a higher finance cost incurred in the year further put pressure on bottomline.

Looking at how the company finance its operation, it was discovered that finance cost grew by 52% from ₦55.63 million in 2013 to ₦84.44 million.

“We note that the Company had to take on additional debt (short-term) to fix its working capital shortages.

“Cash levels were strained due to a 131% spike in acquisition of capital, work in progress as related to capital expenditure”, analysts explained.

Equity research analysts at WSTC said: “the relatively poor performance in 2014 was majorly due to lower production levels by the Company”.

2015 Performance – The Reform and Strategy for Growth

After the challenges witnessed in 2014, the came 2015 which analysts tagged as the year of reform and strategy for growth.

Specifically, WSTC explained that in 2015, there was a change of strategy, as agreed by the Board and management team.

Analysts recognised that in prior periods, the Company consistently faced the need to make provisions for impairment on trade and other receivables.

This was due to the previous strategy of the Company to boost sales through increased credit facilities to distributors.

However, the approach had put the Company in a less advantaged position, as it had to make provisions for impairment consistently.

Analysts said: “For instance, in 2013, provision of impairment stood at ₦154.69 million, which was a significant portion of the Neimeth’s profit before tax of ₦182.14 million during the period.

In line with the Company’s new approach to cash generation, it had to make a significant provision for impairment of ₦289.54 million in 2015.

However, the significant impairment it took on trade receivables weighed heavily on bottomline, as it suffered another loss after tax of ₦335.61 million.

The Strategic Shift to Prosperity

Analysts recalled that during the financial year, the Company proposed a three-pronged approach to long term profitability and sustainability in the marketplace.

WSTC Securities said the approaches were to undertake a surgical overhaul of the corporate structure of the Company to focus on meaningful and sustainable growth.

“In lieu of this approach, Neimeth poached a new Chief Executive Officer, Dr. Mrs. Ebere Igboko-Ekpunobi – a pharmacist by education and practice with experience across the United States and China.

“The appointment of Mrs. Igboko-Ekpunobi came after the retirement of the then CEO, Mr. Emma Ekunno who had reached the retirement age after 35 years in service for Neimeth.

“The appointment of Mrs. Igboko-Ekpunobi was expected to be the game changer as she was entrusted with the responsibility to lead the reconstruction of the Company”, analysts explained.

Also, Neimeth new strategy was for the new helmsmen to consolidate the Company’s local research and product development.

In the process, the Board strengthened the oversight function of the R&D by setting up a special strategy committee headed by Professor Maurice Iwu, a Professor of Pharmacognosy.

It then realigned its market participation strategy to de-emphasise widespread retailing which had always resulted in a corrosion of asset quality and cash flow.

This strategy gave rise to the provisioning of the ₦289.54 million weak recoverable that resulted in the loss-making position of the Company in 2015.

“It performance in 2015 was due to the significant provisioning done by the Company in a bid to realign its strategy”, analysts stated.

The strategies adopted by the Company in the previous year factored in the appointment of a new CEO, appeared to yield results in 2016, analysts stated.

In the year, Neimeth’s revenue rose significantly by 37% from ₦1.46 billion in 2015 to ₦2 billion. The strong topline growth was attributed to an improvement in distribution and sales force.

Earlier in the previous year, the focus of the Company changed as cash generation became the new focus.

Consequently, Neimeth strengthened its working relationship with its major distributor for 80% of its portfolio, Worldwide Commercial Ventures Limited.

WSTC said according to information provided by the Company, efforts were put in place to focus only on distributors who had cash to buy products.

In addition, the management revitalised its field force and measures were taken to recruit and retrain sales representatives during the period.

Analysts stated that the restructuring efforts extended to its operating expense line which dropped by 6% from ₦899.31 million in 2015 to ₦849.69 million in 2016.

In the period, Neimeth recorded a 45% decline in impairment losses on trade receivables, thus underpinning its efforts towards cash generation.

WSTC Securities said as a reward for the patience of shareholders, a bonus issue of 1 for 10 was declared for distribution.

The Company’s negative retained earnings position, resulting from accumulated losses in the past, made it unable to pay dividends to shareholders.

2017 Performance – Riding Through the Rough Sea

In a separate development, Neimeth’s Chief Executive Officer was involved in a sporting accident and had to be hospitalised for an extended period, which later resulted in her resignation.

Analysts explained that the double-whammy of the fire outbreak, coupled with a weak policy implementation – owing to the absence of the CEO who was appointed majorly on the basis of the Company’s renewed strategy drive – took its toll on the Company’s performance during the financial year.

Also, Neimeth’s cost of sales declined by 22%, amid a significant loss in raw materials to the fire outbreak.

Overall, the Company reported a loss after tax of ₦403.92 million during the year, largely driven by events related to the fire outbreak, particularly the inventory write-off of ₦322.97 million.

Neimeth survived its ordeals and challenges and reported a strong rebound in 2018. The pharmaceutical Company’s revenue grew by 44% from ₦1.54 billion in 2017 to ₦2.27 billion in 2018.

Due to the medical challenges faced by its erstwhile CEO, the strategy implementation that was in place had to halt and restart.

However, Neimeth completed the process of hiring a new CEO which later took over in 2019.

In the period, cost of sales increased by 83%, owing to scarcity of foreign exchange.

Management effectiveness and efficiency bears on the performance in 2018 as operating expenses declined by 7% from ₦972.95 million to ₦904.05 million.

WSTC said: “The decline in operating expenses majorly resulted from the strategic decision made by the Company’s Board to relocate the entire personnel of the Company from its property at Ikeja to the manufacturing premises at Oregun”.

According to the Board, the move was intended to ensure enhanced supervision and control of the manufacturing processes.

As a result of the decision, the Company saved about ₦109 million in overhead costs in the period.

Analysts stated that the efforts of the management to reduce the provisioning of impairment on trade receivables continued to yield result, reflected in the 14% decline in impairment charge from ₦220 million in 2017 to ₦188.82 million in 2018.

A significant step undertaken by Neimeth during the financial year was the renovation of its factory, and the opportunity taken to upgrade facilities to modern standards.

A bonus issue of 1 for 10 was recommended to shareholders for the financial period.

Equity research analysts at WSTC stated that based on the firm’s assessment, it noted the improvements in the results of Neimeth.

WSTC Securities explained in the analysts note that it identified the current performance of the Company, particularly in the last two years were manifestations of the strategies and policies put in place since as far back as 2015.

“Based on available information, we believe that the Company is on track to sustain its performance.

“The underlying problem of the Company, in our view, had been the persistent impairment of receivables”, WSTC Securities explained.

Yield Falls to 3.27% as Demand for Treasury Bills Rises