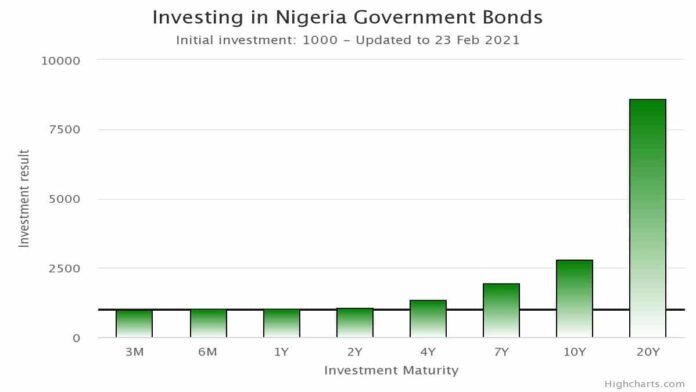 Yields on Bonds Moderated ahead of CBN Primary Market Auction

Specifically, bond yields moderated by an average of 2 bps across the benchmark curve to 10.33%, driven by renewed interests in intermediate and long term bonds.

Consequently, interbank funding rates dropped, as the Open Buy Back (OBB) and Interbank (O/N) rate declined by 13.25 percentage points apiece to 1.75% and 2.00% respectively.

“We expect system liquidity to remain buoyant for the rest of the week, barring a sizeable OMO mop-up by the CBN tomorrow”, Chapel Hill Denham said in a note.

Based on market data, charts the fixed income market traded with a slight bullish bias today.

At the short end of the curve, the Nigerian treasury bills benchmark curve came flattish at an average of 1.44%, while the OMO curve compressed by 14 basis points to 5.89%.

In the currency market, the dollar-Naira pair remained unchanged at the official and SMIS windows at ₦379.00 and ₦380.69 respectively.

The Central Bank of Nigeria (CBN) will hold a Treasury Bills (T-Bills) Primary Market Auction (PMA) on 24th of February 2021.

It is expected that the CBN will re-issue ₦20.37 billion, ₦55.85 billion and ₦52.00 billion across same tenors respectively.

Meristem Securities Limited said, “Much in line with our expectation, investors demanded significantly higher rates at the last PMA, as indicated by the range of bids”.

“Although the CBN was able to raise more money than it planned, we note that investors ‘appetite continued to weaken with a decline in overall bid-to-cover ratio to 1.51x from 1.59x”, Meristem stated.

The firm maintains that given the current inflationary trend, investors will continue to demand higher rates at PMAs and their participation will be limited by rates offered by the government.

In the secondary market has been relatively bearish since the last PMA as average Treasury bills yield rose from 1.20% recorded on the date of the last auction to 1.48% as at 19th February 2021.

“The expectation of higher yields in the future due to higher PMA rates may have led to selloffs by investors to minimize further capital losses and also to take advantage of higher rates at the PMA”, it added.

Also, analysts explained that the relatively low interbank liquidity since the last auction was a key driver of the bearish run in the secondary space.

“While we note that government revenues are expected to perform relatively better this year due to increased economic activities and the positive outlook for oil receipts, the current size of Federal Government debt and planned borrowing in 2021 implies rapidly mounting pressure on revenue through higher servicing costs.

“This also places a constraint on the FGN’s ability to offer risk-reflective rates. It therefore remains uncertain how far higher rates can go at the PMAs.

“For the upcoming auction however, we expect only a slightly higher adjustment in rates from the previous auction.

“We advise rates with the dual purpose of achieving the best possible yields, as well as ensuring the success of the bid”, Meristem Securities Limited.

Yields on Bonds Moderated ahead of CBN Primary Market Auction