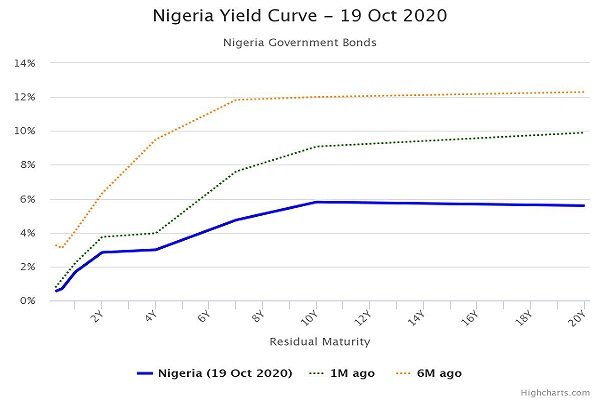 The rally in the fixed income continued Monday as yields dropped further to new record lows, in reaction to the shocking bond auction circular from the Debt Management Office last week and strong financial system liquidity.

At the front end of the curve, the Nigerian Treasury Bill and Open Market Operations benchmark curve compressed by 37 basis points (bps) and 9bps to 0.73% and 1.45% respectively, says analysts at Chapel Hill Denham. 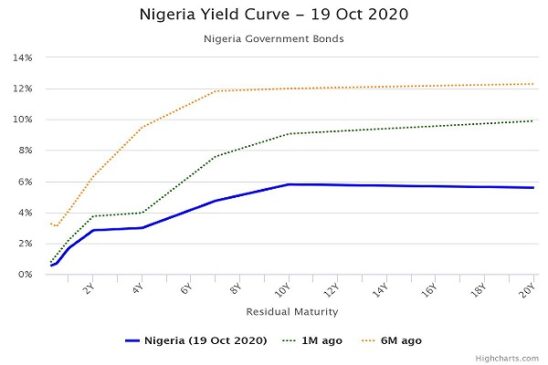 “We expect the market to continue to trade upbeat in the near term, due to thin supply of government securities against elevated demand as a result of high liquidity”, Chapel Hill Denham said.

At the October monthly bond auction holding on Wednesday, the DMO plans to supply only N30 billion.

Analysts said the previous auction cleared at 8.52% and 8.90% respectively, and we expect auction yields to close substantially lower in line with the recent movement in the secondary market.

In line with expectation, money market rates remained stuck at low single digit, as a result of buoyant liquidity in the financial system.

Financial system liquidity opened higher at N772 billion from N409 billion on Friday, and was further boosted by a bond coupon payment worth N32.7 billion.

Chapel Hill Denham said funding pressures will remain benign for much of the week, supported by OMO maturities estimated at N285bn on Thursday.

However, analysts stated that pressures will likely increase on Friday due to provisioning for the retail FX auction.