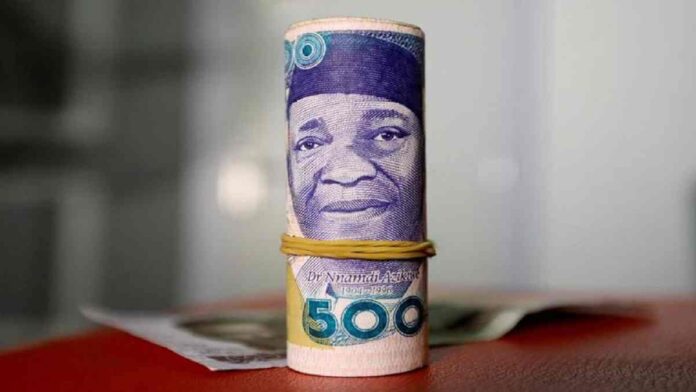 Average yield jumps after investors offload short-dated Nigerian treasury bills in the secondary market as naira tumbles again amidst the ongoing rally in the equity space.

Naira, the Nigerian local currency, depreciated 0.2 per cent to close at N415.07 per the United States dollar in the Investors and exporters foreign exchange window, according to data from the FMDQ Exchange platform.

In the parallel market, FX spread widened as the local currency falls near N580 per dollar amidst rising speculations, though Nigerian foreign currency reserve has seen a significant jump with the inflow from special drawing rights and foreign currency borrowings.

Data from the Central Bank website shows Nigeria’s gross external reserve at $40.6 billion. In the money market, data from the FMDQ Exchange plan shows there was a runoff on the financial system liquidity as short term rates see an upward adjustment.

Rising by 50 basis points, the average interbank rate climbed to 15.25% following 50 basis points jump in both the Open Buy Back rate and overnight lending which close at 15.00% and 15.50%, respectively.

Analysts attribute the pressure to the absence of significant inflows in the financial system.

Consequently, the treasury bills market recorded a 37 basis points increase in average yield which close at 5.37%.

Analysts noted that market participants sold off the 161 days to maturity (+96bps) and 189 days to maturity (+132bps) bills, respectively. Similarly, the average yield at the open market operations (OMO) segment expanded by 15 basis points to 6.5%, Cordros Capital said in its note.

In the bond space, activities were bearish at the FGN bond secondary market following 7 and 6 basis points jump at the short and mid ends of the curve.  Meanwhile, the long end of the curve remained flat.

As a result of the bearish trading position, the average yield in the segment climbed by 4 basis points to close at 11.38%

Across the benchmark curve, analysts spotted that average yield expanded at the short (+10bps) and mid (+5bps) segments driven by sell pressures on the JAN-2022 (+18bps) and MAR-2037 (+21bps) bonds, respectively.

In the Eurobond market, trading activities also ended on a bearish note following expansions across all instruments except the Jun-2022 instrument that remained flat. In sum, the average yield climbed by 2 basis points to close at 6.46%, according to Alpha Morgan Capital. #Yield Jumps as Investors Offload Short-dated Treasury Bills