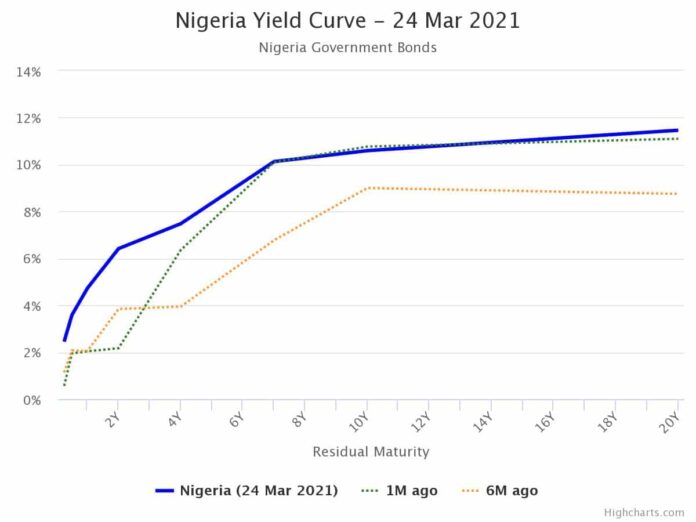 Average yield on Nigerian Treasury bills rises to 3.9% on Wednesday from 3.5% amidst sell-offs in bond market following the monetary authority decision to hold key policy rates.

Yields rose in the T-bills space, resulting from selloffs at the long end of the market. Against this backdrop, the average T-bills yield increased by 36 basis points.

Amid the Primary Market Auction (PMA), the bears resurfaced in the Bond market, pushing the average yield up 11bps to 9.6%.

“We observed investors’ apathy at the long segment of the market which closed flat, while the short end (+27bps) and belly of the curve (+10bps) increased”, Greenwich Merchant Bank said in a commentary.

The banking group also noted that the 27-JAN-2022 instrument sold off the most, rising +159 basis points. In the currency market, Naira maintained stability at the parallel FX market, at N486.00 per dollar.

At the investors and exporters window however, the currency appreciated by NGN1.05 per dollar to close at N408.75 from N409.80 per dollar.

In addition, the outcome of the Debt Management Office’s (DMO) March bond auction was mixed, as clearing rates closed largely flat at 11.10%.

The DMO offered N150 billion, but demand was strong with investor subscription pegged at N333.48 billion, implying a bid-offer ratio of 2.2x, compared to 1.3x in February.

Chapel Hill Denham however noted that Investors’ thirst for yield was relatively moderate, hence, the DMO allotted as much as N262.10bn at the open auction, to take full advantage of the auction outcome.

After yesterday loss, the domestic equities market closed on a positive note as the All-Share Index rose 98 basis points to 39,085.78 points.

Today gain moderated year to date loss to -2.9% as market capitalisation expanded by N199.2 billion to close at N20.4 trillion.

Trading activity waned as volume and value declined 11.8% and 4.7% respectively to 361.9 million units and ₦5.7 billion.

“Across sectors that we cover, performance was bullish as 4 indicators trended northward. The AFR-ICT index led the gainers, up 1.2% due to price appreciation in MTNN (+2.4%)”, Afrinvest said.

Investor sentiment, as measured by market breadth strengthened to 1.3x from the 1.0x recorded previously as 20 stocks gained against 15 decliners.

“In the subsequent trading session, we expect profit-taking in the local bourse”, Afrinvest stated.