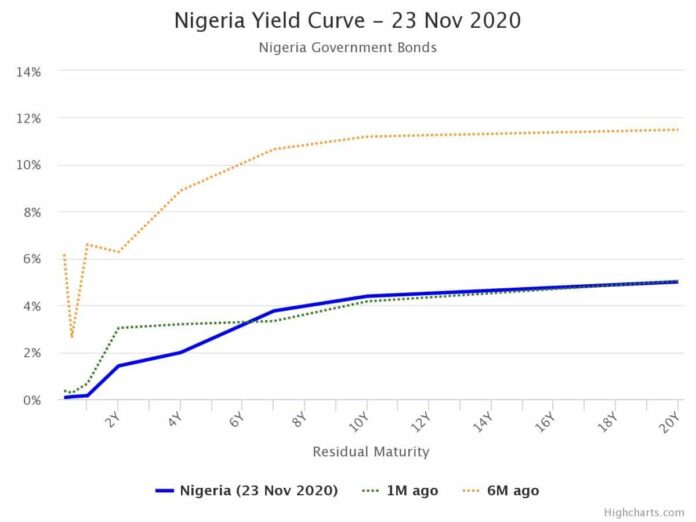 The fixed income market dynamics is already impacting participants investing moods, and there are signs of possible adjustment following a quiet trading week.

Average yield across the market plunged by 6 basis points to settle at 1.4% from 1.5% in the prior week.

Market traded on a rather calm note as investors’ attention was at first focused on the Debt Management Office (DMO) bond auction held mid-week.

Gauging the mood, investors stood at the side-line at the start of the week in anticipation of the outcome of the Bond primary market auction (PMA).

For this week, Greenwich Trust is expecting traction to persist in the forthcoming PMA with stop rates depressing further following robust system liquidity and reduced volume.

Nonetheless, analysts observed renewed buying in the bond market, particularly at the long end of the curve.

Hence, benchmark bond yields compressed by an average of 8bps week on week to 4.20%.

Discount rates on OMO bills compressed by an average of 9 basis points (bps) to 0.13%, while the Nigerian Treasury Bills curve was flat at an average of 0.10%.

Analysts said the outcome of the DMO bond auction was mixed.

However, subscription level came decent at N184.74 billion, implying a bid-cover ratio of 2.3x, but much lower than 4.7x in October.

Notably, headline inflation rate rose for the 14th consecutive month, surging by 53bps to a 32-month high of 14.23% year on year.

Analysts at Chapel Hill Denham said the figure is above its estimate of 14.0% and consensus forecast of 14.1% year on year.

In a related development, the Bureau of Statistics published the Q3-2020 GDP report over the weekend, which officially confirmed the economy is in a recession.

The CBN has made it clear in past MPC communiques that the institutional view is that inflationary pressures are mainly driven by structural factors.

As such, Chapel Hill Denham revealed expectation that the MPC will retain policy rate at 11.5%, at least until the economic recovery gains a foothold in Q2-2021.

“Despite our expectation of a status quo outcome, we expect the sovereign yield curve to remain steep, given the uncertainty regarding monetary policy outlook in 2021.