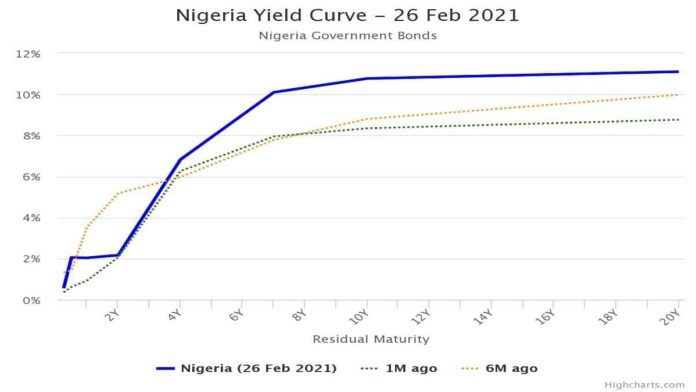 Bullish trend persist in the fixed income market amidst uncertainties as investors await the Central Bank of Nigeria’s decision on refinancing maturing special bills worth NGN4.1 trillion next week.

Following the bullish trend, investors continued cherry picking across the market as investors sought to obtain higher yielding papers into their folds.

As a result, average yield in the fixed income market eased by 16 basis points (bps) to settle at 5.6%, from 5.8% the prior week, says Greenwich Merchant Bank in a note.

The Nigerian Treasury bill secondary market remained relatively muted all through the week, shedding a marginal 2bps to close the week in the blues.

This happened following investors’ appetite for the 29 JUL 2021 bill which dropped 48bps as average yield at Treasury bill market settled at 1.49% from 1.51% in the prior week.

Similarly, analysts said the open market operation (OMO) bill market closed positive, thanks to robust bids at the belly and the tail of the curve, thereby, easing the average OMO-bill yield by 27bps to 6.1% from 6.4%.

It noted the robust system liquidity for the week which average NGN378.1 billion and the dearth of alternative investible asset saw the bid-to-cover ratio settle at 1.5x.

At the start of trade on Friday, the interbank system remained awash with liquidity (NGN204.1bn), despite settlement obligation from primary market activities in the week.

Consequently, money market rates plunged for the week, the Overnight and Open Buy Back closed at an average of 6.0%, juxtaposed with an average 20.3% in the prior trading week.

The Bond Market continues to be bid driven

“We witnessed investors cherry pick oversold papers across the belly to the tail of the curve as they attempt to re-invest coupon inflows in the week”, Greenwich said.

As a result, the Banking group said average bond yield dipped 18bps to 9.2%, from 9.4% at the close of trading in the prior week.

Elsewhere, the FX market traded exceedingly active in the week as the Naira depreciated by NGN0.25 at the Investors and Exporter Window (I&EW), closing at NGN410.25/USD from NGN410.00/USD in the prior week.

Likewise, the Naira weakened by NGN4.00 in the Parallel Market against the Dollar to settle at NGN482.00/USD from NGN478.00/USD in the prior week.

“In the coming week, we expect continued cherry picking of papers with higher yields across the curve, hinged on a robust interbank system, following expected inflows of NGN130.5bn from maturing OMO-bill and a NGN4.1tn worth of Special-bill, which could be rolled over at the discretion of the CBN”, Greenwich Merchant Bank said.