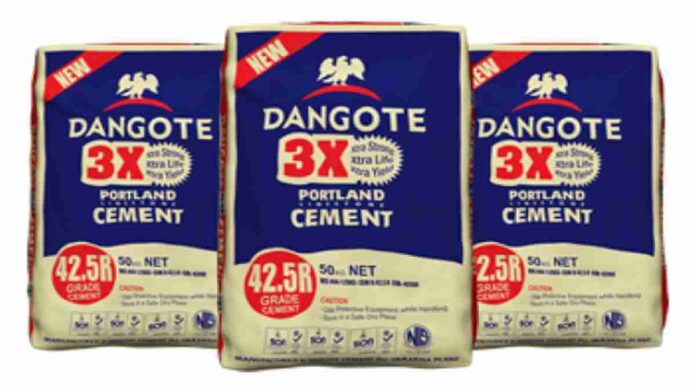 Dangote Cement Plc boosts earnings performance pretty well in the first quarter (Q1) of financial year 2021 on strong demand from domestic economy and across African countries where it registered its presence.

Recall the company released its Q1 2021 unaudited financial results recently, where it reported an impressive 33.5% year on year growth in revenue to N332.65 billion from N249.2 billion in Q1 2020.

In an equity report, analysts at CSL Stockbrokers noted the significant increase in revenue was supported by strong volume growth, following a gradual economic recovery.

Overall, the group volume jerked up by a whooping 18.7% year on year to 7.5 million tonnes.

“For the Nigerian operations, while we recognize the continued contribution from increased private sector investments following the removal of movement restrictions in Q3 2020, we also cite the additional volumes from 3Mt Obajana Line 5 commissioned in August 2020 as a contributory factor to the firm’s topline performance”, analysts said.

For the Pan-African operations, CSL Stockbrokers believe that strong cement demand from countries such as Cameroon in preparation for the African Nations Championship assisted the volume growth.

The modest growth in operating expense coupled with strong growth in revenue led to a 55.8% year on year increase in earnings before interest tax depreciation and amortisation (EBITDA) to N178.0billion in Q1 2021 from N114.2billion in Q1 2020.

The surge in Finance Cost was due to the foreign exchange loss of N10.6 billion incurred by the company in Q1 2021 compared with nothing in Q1 2020.

Furthermore, finance income declined by 30.9% year on year to N3.7billion in Q1 2021 reflective of the low yield environment.

“We maintain our Buy recommendation on the stock with a target price of N250.13 per share”, CSL Stockbrokers said.