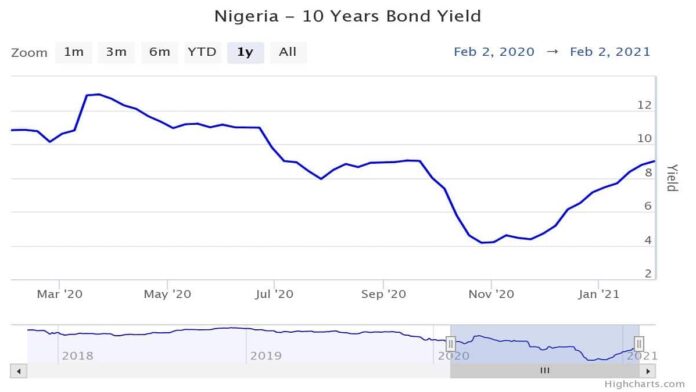 In a note, Chapel Hill Denham said yields rise across the benchmark curve by an average of 5 basis points (bps) to 8.75%.

Analysts at the investment firm attributed this to repricing at the short (+34bps to 6.14%) end of the curve.

The inflow which hit the financial system lifted liquidity to N214 billion from N107 billion previously.

At the front end of the curve, discount rates across the Nigerian Treasury Bills and OMO curves closed flat at an average of 1.19% and 2.08% respectively.

However, bond yields rose marginally across the benchmark curve by an average of 5bps to 8.75%, mainly due to repricing at the short (+34bps to 6.14%) end of the curve.

However, analysts said the selling has been concentrated at the long end of the curve, leading to a bear steepening.

“As a result, we expect a better performance in the bond market in February”, Chapel Hill Denham added.

Notwithstanding, analysts said they are expect yields to normalize over the medium term, as the CBN positions to re-engage Foreign Portfolio Investors.

In the parallel market, the naira to dollar pair traded flat at 480.00 as external reserves stood at US$36.40 billion.