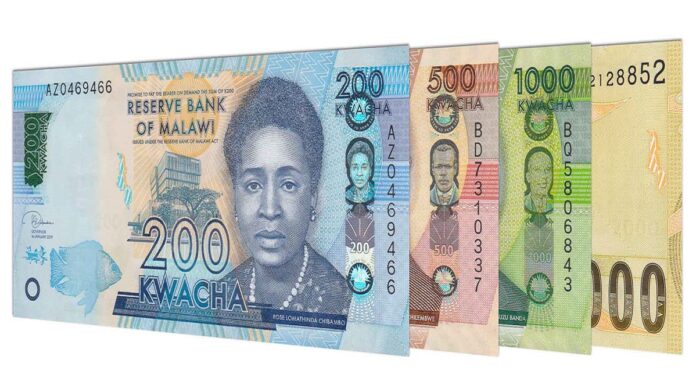 The Malawian Kwacha continues to perform strongly against currencies of major trading partners given the lean season, sheds less than 7% against the United States dollar a year to date compared with Nigerian naira that has lost more than 7% against the greenback.

Trading against the Africa FX market and primary currencies, the Kwacha closed at K822.8035 to a United States dollar on 12th November 2021. On the other hand, Angola, Zambian currencies recorded gains against the dollar.

Though Malawi has seen its gross official foreign exchange reserves decline by US$7.7 million to close the review week at US$398.56 million, it’s sufficient to cover 1.59 months of imports.

The tight liquidity conditions in the banking system continue to affect subscription and allotment on the Treasury securities primary market.

Inflation accelerated more than expected in October, pushed up by increases in food and fuel prices. Headline inflation rose to 9.8%, from 8.9% in September 2021 and 7.5% in October 2020.

International oil prices have stabilized, after wild swings on prospects of rising oil supply. Crude oil prices fell 0.8% to settle at US$82.17 per barrel in the week ending 12th November 2021.

The gross official FX reserves declined by US$7.7 million to close the review period at US$398.56 million, sufficient to cover 1.59 months of imports.

This is compared to a US$3.44 million decline recorded during the preceding week. Supply in the FX retail market improved but remained low relative to demand with ADBs purchasing from the market a total of US$26.47 million from US$21.3 million recorded during the week ended 5th November 2021.

The Kwacha generally continues to perform against currencies of major trading partners during the lean season.  The Kwacha lost 0.04% (29 tambala) against the US dollar to close the review week at K822.8035 per US dollar.

This year up to 12th November 2021, the Malawi Kwacha has depreciated by 6.5% against the US dollar. At the Sub-Saharan Africa level, currencies exhibited mixed performance.

Liquidity conditions in the domestic money market remained very tight, albeit recording improvement as captured by an increase in the daily commercial banks’ excess reserves, before borrowing from the central bank, to an average of negative K94.5 billion per day from negative K109.2 billion per day recorded during the week ended 5th November 2021.

Consequently, resources available on the interbank market increased and borrowing from the central bank, as a last resort, declined. Interbank traded volume increased to K22.7 billion per day from

The interbank market rate (IBR) remains firm and closely aligned to the policy rate at the resistance level of 11.98 per cent. Thus, the IBR continues to be within the target corridor of +0.2/-4.0 percentage points around the policy rate.

Total central bank operations with the commercial banks were expansionary during the review week, injecting a net of about K18.6 billion into the banking system.

Treasury securities (K4.0 billion), and net commercial bank’s borrowing from the central bank on the Lombard facility (K4.7 billion). On the other hand, Government operations, dominated by net issuance of Treasury securities, withdrew K4.4 billion from the banking system.

The tight liquidity conditions in the banking system continue to affect subscription and allotment on the Treasury securities primary market.

Inflation accelerated more than expected in October 2021, pushed up by increases in food and fuel prices. Headline inflation jumped to 9.8%, from 8.9% in September 2021.

The transportation component of inflation edged up to 12%, year-on-year, by far the biggest contributor. In the sub-Saharan Africa region, inflation developments were mixed.

In Angola, inflation climbed for the seventh straight month to 26.9% in October 2021, its highest level since July 2017. Inflation in Mozambique accelerated for the third straight month to 6.4%, from 6.0% in the previous month, mainly pushed up by prices of food.

Inflation in Tanzania stood at 4.0% in October 2021, unchanged from the previous month. International oil prices have stabilized, after wild swings on expectations of rising oil supplies.

Crude oil prices were at US$81.52 a barrel. OPEC+, a group of OPEC, Russia and other countries, has maintained unprecedented restraint on production, even as prices have rebounded from the depths of the early stages of the coronavirus pandemic.

Oil prices reached a multi-year high of US$86.70 per barrel in October 2021, its highest level since October 2018. #Africa Watch: Eyes into Malawian Economy, Foreign Exchange Market