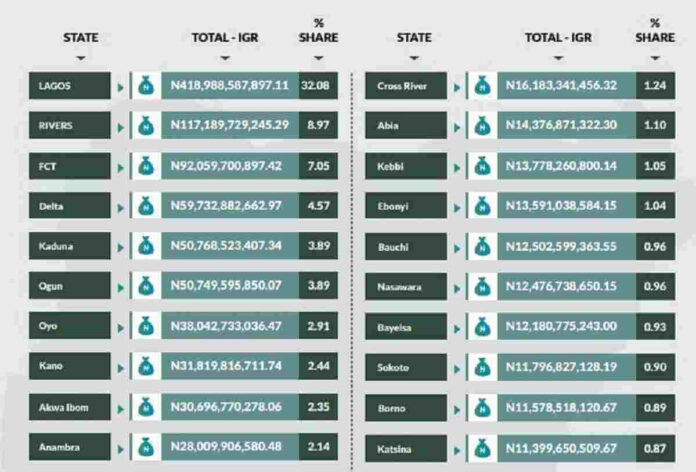 At a total sum of N385.182 billion, the 19 Northern States and Federal Capital Territory (FCT) internally generated revenue (IGR) was 8% lower when compare with Lagos State that delivered N418. 988 billion revenue in the period.

Though Lagos State was locked down ahead of others during the pandemic, its IGR expanded by more than 5% due to its fundamental structure and earnings automations.

Nigerians states are constitutional designed to generate revenue via internal architectures including personal income tax via pay as you earn, direct assessments, road taxes and other forms of taxes and ministries, department and associations contributions to these states wallets.

What distinguishes these Nigerian States along the IGR line include effectiveness in taxes collection as well as ability to generate income from personal income of its labour force economy.

States with higher IGR were mostly supported by size of revenue generated from labour economy pay as you earn in addition to taxes collection.

Both Lagos and Rivers state led the pack in this regard, thus explained the state economy sizes.

Analysis of the 36 States data shows that all states in the North including Federal Capital Territory accounted for less than 30% of total internally generated revenue for 36 States.

According to a new report from the National Bureau of Statistics (NBS), 36 states and FCT IGR figure hits N1.31 trillion in the pandemic year compared to N1.33 trillion recorded in 2019.

The decline could be attributed to trickle down effects of the outbreak of coronavirus pandemic in 2020 that necessitated economic lockdown in the first half.

According to NBS, the recorded amount generated indicates a negative growth of -1.93% year on year, though some states saw an increase in their revenue generation.

Lagos, Rivers States and some other Southern states were able to buck falling revenue trend.

Specifically, it was noted that in the fourth quarter of 2020, the states and FCT IGR figure hits N335.25 billion compared to N338.57 billion recorded in the third quarter of the same year, indicating a negative growth of -0.98% quarter on quarter.

Lagos State IGR rise by 5.08% to N418.99 billion from corresponding year in 2019, closely followed by Rivers States with N117.19 billion after recording a 16.53% drop while Yobe recorded the least internally generated revenue.

NBS data indicates that Yobe State reported a 7.87% year on year decline in revenue in the period.

Of the total sum of N2.293 trillion shared by the federal accounts allocation committee, the Northern States took N1.038 trillion.

Kano State was hit by revenue missed, falling by more than 21.61% with both Ebonyi and Kebbi appear as pandemic winner with IGR growth of 82.3% and 87.02% respectively.

Both States internal revenue generated however appeared quite small when compare with others at N13.8 billion and N13.6 billion respectively.

Gombe, Taraba, FCT, Zamfara, Plateau, Nasarawa and Kaduna also recorded double-digit growth in IGR in the period, perhaps due to lower exposure to COVID-19 and delayed lockdown for the states.