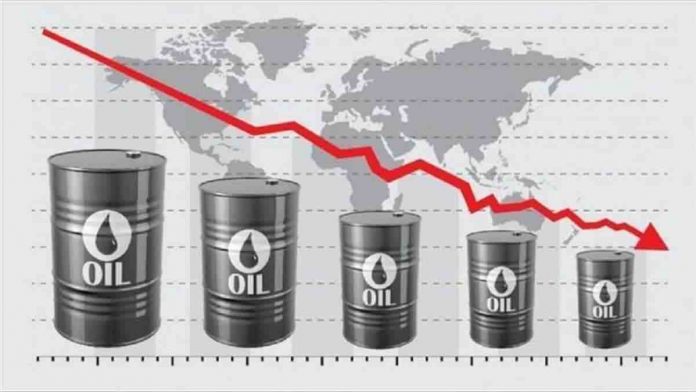 Market data shows that international benchmark Brent crude was trading at $64.69 per barrel as it dropped off 1.11% after closing Friday at $65.42 a barrel.

Also, American benchmark West Texas Intermediate (WTI) was at $61.47 per barrel at the same time, with 1.07% drop after it ended the previous session at $62.14 a barrel.

According to Oil traders, surging coronavirus cases in India appear to be a key driver for oil price declines by curtailing optimism over an oil demand rebound in the country.

Recently, India registered an exponential increase in daily coronavirus cases to over 300,000 since Thursday last week.

Rising cases of infected patients has however led to a shortage of oxygen in hospitals and has brought the country’s health system to the verge of collapse.

Recording another global record on Monday, the country registered 352,991 new infections, according to the country’s Health Ministry.

The country’s total caseload rose to over 17.3 million while the death toll stands at 195,123, including a record 2,812 new fatalities, a tally from Johns Hopkins University shows.

The worst-hit area is the capital New Delhi, where the government announced a lockdown extension for another week.

Facing tough questions over its management of the pandemic, the government has now taken more steps to tackle the second deadly wave, pressing railways, the air force and the navy to transport oxygen across the country.

The markets are also awaiting the next OPEC+ meeting on Wednesday when the world’s major oil producers will discuss their production level as of May.

The group decided in their previous meeting at the beginning of April to increase production by 2.1 million barrels per day (bpd) up to the end of July, incrementally easing the current production cut of 7.9 million bpd.

Last week, oil prices decreased at about 2% during the week end over resurgence in coronavirus cases in EU, India and Japan which continues to threaten the global oil demand recovery.

International benchmark Brent crude traded at $65.21 on Friday, posting a 1.9% decrease from Monday when trade registered at $66.48 per barrel.

American benchmark West Texas Intermediate (WTI) traded at $61.30 at the same time on Friday, declining 2.6% relative to $62.95 a barrel on Monday.

The prices started the week on a negative note due to investor jitters over the recent increase in coronavirus cases across the European continent and India to further dent energy demand.

The increase in commercial crude oil stocks in the US, the world’s largest oil consumer, signaled a fall in oil demand and exerted downward pressure on oil prices.

India registered fresh all-time highs Friday for coronavirus cases and deaths in the past 24 hours when 332,730 new cases were recorded and the death toll reached 186,920, including 2,263 new fatalities.

Meanwhile, Japan is set to declare a state of emergency in some parts of the country including Tokyo, Osaka, Kyoto, and Hyogo, between April 25 and May 11, which is expected to affect nearly 25% of the country’s population.

Markets are now focused on the upcoming meeting in May of the Organization of the Petroleum Exporting Countries and allies led by Russia, known as OPEC+ when major oil producers will discuss their production quotas.

During the previous meeting on April 1, the group decided to increase their production by 2.1 million barrels per day (bpd) until the end of July, incrementally easing the current production cut of 7.9 million bpd.