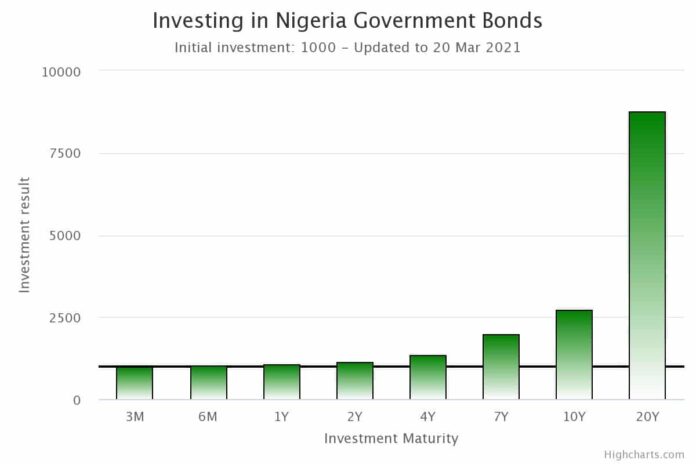 The bearish trading at the fixed income market came following heavy selloffs seen across the markets in response to expectations of increased yields across the curve, Greenwich Merchant Bank stated.

It said in a report that the contempt depicted across all maturities signals as optimistic sentiment of continued spike in rates at the primary market.

Thereby, average yield in the fixed income market spiked by 52 basis points to close the week at 6.5% from 6.0% in the prior week.

It was however noted that market players flooded the Nigerian Treasury bill secondary market with offers in the expectation of better rates at the scheduled Primary Market Auction (PMA) in the week.

Thus, yields on the average across the Treasury bill market spiked by 78 basis points to 3.5%, from 2.7% in the prior week.

Yield on Bond Rises as Naira Depreciates at Investors Window

The Apex bank in its scheduled PMA offered bills worth NGN47.1 billion, albeit allotting NGN116.9 billion or 148.3% over its initial offer.

Greenwich stated that the expanding bid range did not wither, thus forcing the apex bank to allot 364 day to maturity (DTM) at 7.00%, 50 basis points premium over the last PMA, while keeping the 91DTM and 182DTM flat at 2.00% and 3.50% respectively.

Following a robust system liquidity in the week, the bid-to-cover ratio remained elevated settling at 2.5x.

Despite a robust liquidity level in the interbank system at the start of the week, primary market activities and a special cash reserve ratio debit mopped up liquidity for the week, which settled at an average N249.6 billion against N114.6 billion in the prior week.

Consequently, money market rates remained elevated for the week, as the Overnight and Open Buy Back closed at an average of 25.3% from 13.8% in the prior trading week.

Similarly, the bond market closed the week bearish, with huge selloffs across the curve save the 23-MAR-2025 paper.

Analysts saw market players retreated to the side-lines in anticipation of the outcome of the forthcoming Monetary Policy Committee (MPC) meeting and the scheduled bond PMA.

As a result, the average bond yield increased by 26 basis points to 9.5%, from 9.3% at the close of trading in the prior week.

The Naira steadied at N410.00 per dollar week on week at the Investors and Exporter Window (I&EW).

In terms of turnover, the FX market retracted marginally by 5.4% in the week at the I&EW to an average of USD82.4 million from USD87.1 million at the prior session.

On a familiar feat, the Naira closed flat at the parallel market against the USD to settle at NGN485.00/USD, from the prior week.

“We expect a quiet session at the start of the coming week across the secondary market as market players anticipate the outcome of the forthcoming MPC meeting and the scheduled bond auction.

Meanwhile, Afrinvest analysts said higher yield in the US continues to throttle demand in the Sub-Saharan Africa (SSA) Eurobonds market after rising to 1.7% this week from 1.6%.

Elsewhere, the Zambian instruments were sold off after the finance minister hinted at another default in coupon payment (US$20.2m), reiterating fiscal hardship as the cause.

Analysts also noted that sell pressures were dominant in the Ghanaian 2022, with yield rising 335 basis points this week due to speculations on new Eurobond issuance.

“The average yield on Corporate Eurobonds under our coverage rose 4 basis points to 4.6% in line with the general market trend”, Afrinvest reported.

It said this was primarily due to the increase in yield on the FIDELITY 2022 and OFFICE CHERIFIEN 2044 instruments, which were up 27bps and 16bps respectively.

In the coming week, the Debt Management Office (DMO) is set to reopen 10, 15 and 25-year bond instruments worth ₦150 billion.

Then, coupon payment worth ₦52.8 billion is expected to hit the market, causing analyst’s to anticipate renewed interest in the domestic bond markets.

In the Eurobond space, Afrinvest believes that the direction of the US bond yield is expected to guide sentiment.