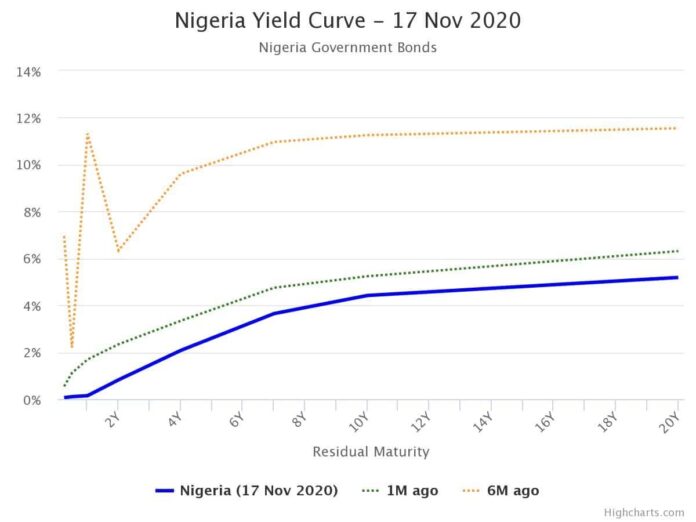 The Bureau of Statistics report indicated that consumer price index rose 14.23% for the month of October, a 53 basis point above the previous month.

Liquidity was boosted by open market operations (OMO) repayment worth N269.4 billion by the Central Bank of Nigeria (CBN).

Chapel Hill Denham expects funding pressures to remain subdued until Friday, when the CBN is scheduled to hold the bi-weekly retail FX auction.

The firm however hinted that despite the negative inflation surprise yesterday, analysts saw a renewed appetite for bonds.

At the front end of the curve, the Nigerian Treasury Bill (NTB) benchmark curve closed flat at an average of 0.10%, while the OMO curve eased slightly by 1bp to 0.12%.

All eyes will be on the Debt Management Office (DMO) bond auction holding Wednesday as investors will be hoping to gauge the DMO’s aggression.

Particularly, in view of large OMO maturities due in December.

Based on the bond auction circular published last week, the DMO plans to raise up to N80bn, split equally at N40bn between the 15-year MAR 2035 reopening and 25-year JUL 2045 reopening.

“We expect the auction to clear at lower yields, given the supportive liquidity backdrop”, Chapel Hill Denham stated.