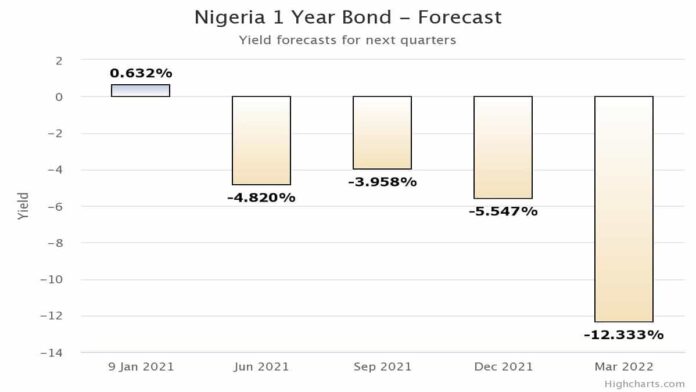 The fixed income market tumbles for the first trading week in 2021 amidst low interest rate environment projected to last at least for the first half.

The market commenced trading in the New Year on a relatively bearish tale from the prior trading session to settle the average yield across the market at 2.57% from 2.39%.

Greenwich Trust Limited said in a note that fixed income investors extended the run of profit taking in both the Bond and OMO-bill Market into the New Year.

Analysts noted that investors’ attraction to Nigeria Treasury bills at the short end of the market drove the curve into a positive close.

On the flip side, the Open Market Operations (OMO) bill witnessed lot of offers as investors sought to offload chunk of bills at the tail of the curve.

Meanwhile, the apex bank in a scheduled Primary Market Auction (PMA) will rollover bills worth NGN232.4 billion across the 91 day to maturity (DTM), 182DTM and 364DTM.

In light of a robust system liquidity (NGN1.0trn), analysts expect auction to record a robust bid-to-cover ratio whilst the CBN will keep rates relatively flat across the curve despite investors seeking more yields in the PMA.

Despite a buoyed system liquidity, analysts saw money market rates spiked into the upper band of the single digit.

Thus, the Overnight and Open Buy Back closed at an average of 8.7% for the week, juxtaposed with an average 0.7% in the prior trading session.

Specifically noted is the fact that Bond market closed the week as the worst performing asset in the following continued profit taking across the curve.

Analysts at Greenwich Limited said they witnessed a lot of profit taking in the FEB 2028 and MAR 2035 maturities.

Consequently, average bond yield steeped northward by 32bps to 6.44% from 6.12% at the close of trading in the prior session.

Also, the foreign exchange market opened the year relatively quiet as the Naira strengthened in the Investors and Exporter Window (I&EW) following a blotch session at the close of the year.

In the I&EW, the Naira closed at NGN393.5/USD from NGN410/USD in the corresponding period prior week representing NGN16.5 upside.

Meanwhile at the Parallel Market, Naira weakened against the USD to settle at NGN472.0/USD from NGN470.0/USD in the prior week.

In terms of turnover, the FX market softened to an average of USD35.3 million from USD176.6 million in the prior session.

“Forging into the new week, we expect the Treasury bill market to remain order driven bolstered by the robust system liquidity and the sparse security available in the market.

“We anticipate continued sell off at the belly and tail of the bond market while investors will cherry pick high yielding bonds at the head of the curve in a bid to book lingering liquidity in the system”, Greenwich stated.