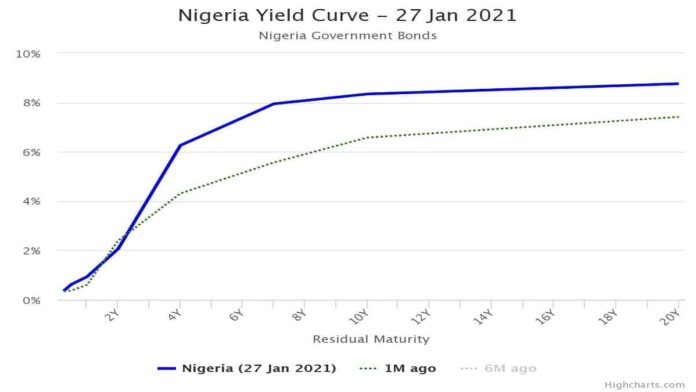 “Barring a major OMO auction by the CBN, we expect funding pressures to remain benign, at least until Friday’s retail FX auction”, Chapel Hill Denham said in a report.

The firm stated that as expected, sentiments were broadly bearish in the fixed income market as investors remained cautious ahead of MPC decision.

Short term rates expanded, as the Nigerian Treasury bill and OMO benchmark curves rose by an average of 3bps and 1bp to 0.52% and 1.21% respectively.

Analysts said in line with expectation, the MPC maintained status quo at the 2-day MPC meeting which ended today.

The MPC voted unanimously to retain the Monetary Policy Rate (MPR) at 11.50%, and the asymmetric corridor around the MPR at +100bps/-700bps.

The Committee also retained the Cash Reserve Requirement (CRR) at 27.5%, and liquidity ratio at 30.0%.

Prior to the MPC meeting, investors in the fixed income market were positioning for a tighter monetary policy framework over the medium term.

Notably, the benchmark yield curve has risen by an average of 233bps from the lows of about 3.3% in October 2020 to an average of 5.6% presently, with long term rates faster than short term in a bear steepening of the curve.

“Despite the neutral outcome of this meeting, investors will be paying close attention to the outcome of the next few T-Bill auctions to test the CBN’s resolve in keeping short term rates depressed at current level.

“However, based on liquidity factors and government deficit financing plans, our medium term outlook for yields remains biased to the upside”, Chapel Hill Denham said.

In the currency market, the Naira strengthened marginally against the United States dollar at the I&E Win-dow by 0.04% or 17 kobo to 394.00.

Remittance: CBN to Give N5 Per Dollar Receives Via Licensed IMTOs