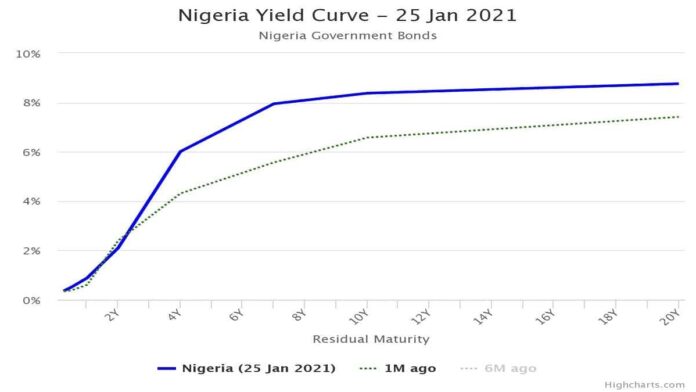 In search for market direction, investors are expecting improvement on yields on fixed income instruments amidst rising inflation rate.

In the money market however, funding pressures eased slightly, partly driven by bond coupon payments, after series of debits on pushed rates to double-digit territory on Friday.

Meanwhile, short term rates expanded in the fixed income market as Treasury bill and OMO benchmark curves rose by average of 2bps and 41bps to 0.49% and 1.19% respectively.

In the bond market, long term yields traded flattish, yet, the benchmark bond yield curve expanded by an average of 14bps to 7.44%, due to repricing at the short end of the curve.

This week, Chapel Hill Denham said two events could provide more clarity to investors on the direction of rates in the short term.

Firstly, the MPC is scheduled to hold its first meeting of the year between Monday 25th and Tuesday 26th January.

“We expect the MPC to maintain status quo at the meeting – retaining the MPR at 11.5% and holding all variables constant – against the backdrop of weak economic output and stronger COVID-19 infection wave forcing more economic restrictions.

“Notwithstanding, the market will be looking for clues on short- to medium-term monetary policy direction”, analysts stated.

Secondly, a rollover Treasury bill auction scheduled to hold on Wednesday, with expectation that the Debt Management Office (DMO) will offer a total of N187.3 billion.

“With the yield curve at the steepest level since March 2020, a surprising auction by the CBN will have implications on the slope of the yield curve and broader investor sentiment”, analysts said.

In the currency market, the Naira weakened marginally against United States dollar at the I&E Window by 0.08% or 33 kobo to 394.50.

In the parallel market, the Naira pair traded flat at 477.00.