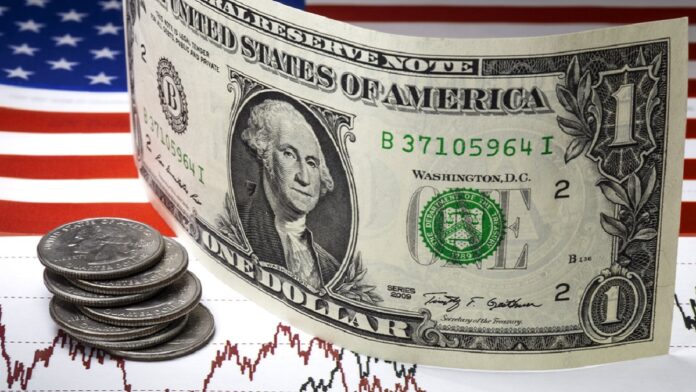 The US dollar index jumped to its highest level in 16 months as the greenback continued to show strength amid the recent surge in inflation.

The dollar index, which is based on a basket of major currencies, climbed 0.4% to 96.84 on Wednesday, its strongest showing since July 2020 and a new 52-week high.

The US currency appreciated as the personal consumption expenditure, or PCE, the price index rose 0.6% in October, less than the expected 0.7% increase, but was up 5% year-over-year, from a 4.4% annual gain in September.

The index, which is closely monitored by the Federal Reserve in formulating policy, had climbed 0.4% in September.

The core PCE price index was up 0.4% in October, as expected following a 0.2% increase in the previous month, extending its surging trend off the back of growing price pressures in the economy.

“This new momentum [in the dollar] began in tandem with the release of the latest US inflation figures,” Desjardins economists including Jimmy Jean said in a research note Wednesday. These numbers have “encouraged many investors to bet on a faster tapering of asset purchases by the Federal Reserve and earlier interest rate hikes.”

A recent decision to taper asset purchases was unanimous at the Federal Open Market Committee’s Nov. 2-3 meeting, minutes released Wednesday showed. Some policymakers argued the planned pace of the tapering was too slow given the inflationary pressures in the US economy.

Powell’s nomination for a second term as Fed Chair appears to have set the stage for faster tapering as Lael Brainard, who was also in running for the leadership role and has been nominated as vice chair, was seen as relatively “more dovish,” Jean said.

Further, the US economic data has also been “more encouraging of late,” he added in the note. #Dollar Index Hits 16-Month High as Inflationary Pressures Bite