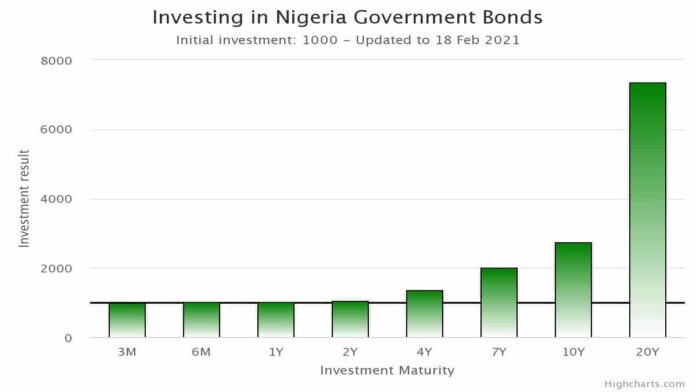 Meanwhile, the Nigerian treasury bills traded flattish at as average yield closed the day at 1.5%.

On Thursday, the financial system liquidity was broadly robust, albeit lower at N582.8 billion compared to N591.0 billion in the previous day.

Notwithstanding, funding rates increased ahead of substantial debits tomorrow, says Chapel Hill Denham in a note.

Analysts at Chapel Hill Denham said they expect system liquidity to tighten in the session ahead, due to settlement of the Debt management Office (DMO) bond auction, and the CBN’s retail FX auction.

Market report indicates that the fixed income market traded largely flattish despite the bearish outcome of the DMO’s bond auction.

At the front end of the curve, the Nigerian treasury benchmark curve was unchanged at an average of 1.45%, while the open market operations (OMO) curve rose marginally by 1bp to 5.91%.

Jumpy Inflation Rate: No Respite until Second Half of 2021 –CHD

It was observed that duration apathy persisted in the bond segment as increased positioning at the short end of the curve (-15bps to 7.81%) was offset by upward reprising of yields on intermediate tenors (+9bps to 10.45%).

Hence, the bond yield curve expanded marginally by an average of 1bp to 10.07%.

Similarly, the National Bureau of Statistics (NBS) published Nigeria’s Q4-2020 GDP report, which revealed that the Nigerian economy posted a surprising early recovery from the COVID-19 induced recession which lasted from Q2-2020 to Q3-2020.

Notably, the report showed that economic activities expanded by 0.11% year on year, a sizeable improvement from -3.62% in Q3-2020, despite the re-introduction of economic restrictions in the quarter on the back of the stronger COVID-19 infection wave.

In the currency market, the naira remained unchanged at the official and SMIS windows to N379.00, and N380.69 respectively.