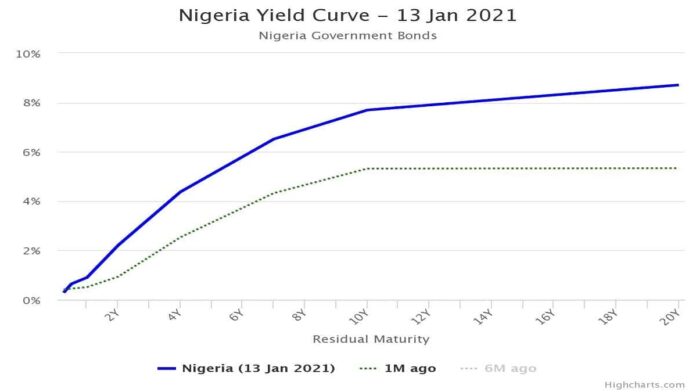 The bond market sustained an upward re-pricing of long-dated instruments for the second consecutive day as investors scramble for returns.

However, in the money market, the first batch of January bond coupon payments of ₦194 billion bolstered the financial system liquidity.

Liquidity opened the trading day at ₦446.76 billion as against ₦402.40 billion in the previous day.

In a note, Chapel Hill Denham said the attendant impact of the foregoing drove a sharp deceleration in the Interbank funding rates.

“We expect funding pressures to remain benign in the near term, barring a major cash reserve ratio debit by the Central Bank of Nigeria”, Chapel Hill Denham stated.

Analysts noted that sentiments were broadly mixed in the fixed income market, albeit with a bearish bias, as investors continued to play the waiting game.

At the front end of the curve, the Nigerian Treasury bill benchmark yield curve rose by 3bps on average to 0.48%.

The upward re-pricing of long-duration instruments extended for the second consecutive day, to drive the benchmark bond yield curve slightly higher by another 1bp to 6.84% on average.

Although rates at the short end dipped by 1bp to 3.93% on average.

However, analysts said this was neutered by the bearish performance in the long (+5bps to 8.36%) end of the curve.

Market data shows that the mid-end of the curve closed flat at 7.41% as rollover Treasury bill auction was however held today as scheduled.

However, the CBN only allotted ₦107.22 billion, owing mostly to the expansion in stop rates which grew by 42bps on average to 1.00%.

In the currency market, the Naira appreciated against the United States dollar at the Investors & Exporters Window by 0.17% or 67 kobo to ₦393.33.