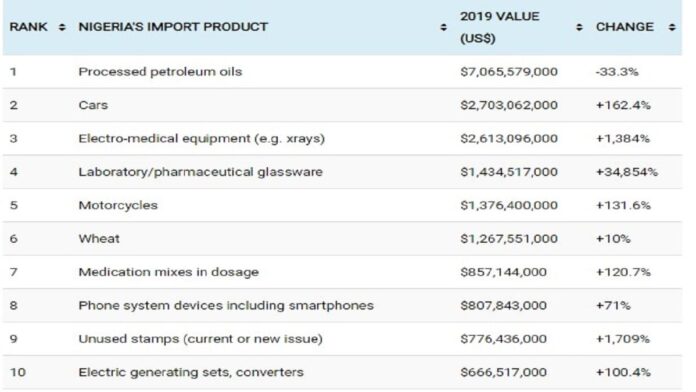 Data from World’s Top Export website shows that Nigeria’s importation of goods and service is fast rising despite growing prohibition lists, the development has worsen amidst pressure from the outbreak of COVID-19.

In its market report, analysts explained that foreign exchange rate remained unchanged at ₦379.00 and ₦380.69 at the official and secondary market intervention sales windows, respectively.

The average daily turnover in the I&E Window rose by 22.4% week on week to US$163.39 million, as the Nigerian Autonomous Foreign Exchange (NAFEX) rate appreciated by 0.25% wow against United States dollar to ₦394.00.

However, analysts maintained that activity level in the window is still considerably lower than Q1-20 levels with US$350 million daily average.

Elsewhere, pressures eased in the parallel market following the CBN’s new guidance on IMTO remittance, allowing the Naira appreciate by as much as 470bps (₦7.00) to close the week at ₦475.

Macroeconomic data showed that the wider trade deficit was against the backdrop of a 38% year on year and 34% quarter on quarter surge in imports to ₦5.4 trillion or US$14.2 billion.

Although exports improved on a QoQ basis due to recovery in oil prices, the value fell sharply by 43% year on year to ₦3.0 trillion (US$7.9bn) due to low base effect.

“While we expect exports to continue to rebound on a QoQ basis, the surging level of imports, despite FX restrictions, suggests further currency adjustment is inevitable to rebalance external accounts.

“Our base case view is that we are likely to see further adjustments in 2021E, which would take the Naira-dollar exchange rate above ₦420.00 in the I&E window”, Chapel Hill Denham said.

In a related development, sentiments turned bearish in Nigeria’s fixed income market last week, on the back of an unexpected hawkish outcome of the rollover Nigerian Treasury Bills (NTB) auction.

There were concerns regarding the decision of the CBN to securitise excess Cash Reserve Requirements (CRR) deposit.

Bid-ask spread widened and turnover fell on Thursday amidst the uncertainty but spreads tightened after the CBN eventually announced the pricing, tenor, and size of the Special Bills.

Notwithstanding, yields on benchmark bonds expanded by an average of 71 basis points (bps) week on week (wow) to 4.91% on Friday.

Also, discount rates on the NTB and OMO benchmark curves expanded by an average of 31bps and 16bps wow to 0.44% apiece.

At the NTB auction which was held mid-week, the CBN, on behalf of the DMO, offered and allotted N50.93 billion.

Subscription level was relatively weak at ₦102.97 or 2.02x bid-cover ratio as against 2.96x at the last auction in November) and skewed in favour of shorter-dated maturities amid uncertainties.

On Thursday, the CBN eventually issued the special bills to refund a sizeable portion of the excess CRR of banks sterilised by the apex bank.

The CBN sold an 81-day bill at 0.5% discount rate to the banks. The size of the issuance is estimated at about ₦4 trillion.

Analysts said the CBN’s decision to issue the securities at a relatively low discount rate of 0.5% helped restore some forms of stability to markets on Friday.

Prior to the decision of the CBN to securitise excess CRR, analysts had earlier made a call that the interest rate environment will be elevated from Q2-2021.

The projection was anchored on a more hawkish CBN, once the economy makes a full recovery from COVID-19 disruption, lower interbank liquidity as OMO maturities decline substantially.

The issuance of Special Bills, which effectively introduces additional securities in the financial system, appears to have brought that timeline forward, analysts stated.

However, Chapel Hill Denham thinks extent of the bearish reaction to this event depends on how aggressive banks sell their holdings of the Special Bills to Non-Bank Financial Institutions (NBFIs).

Given the weak lending opportunities and large OMO maturities in coming weeks, analysts at Chapel Hill Denham believe banks may be reluctant to aggressively dispose the securities.

Particularly at the risk of booking a sizeable fair value loss on such a large inventory if interest rate surges.

Considering all the uncertainties, the investment firm indicates that the market will be fervently looking forward to the bond auction holding on Wednesday.

At the auction, the Debt Management Office (DMO) plans to offer ₦60 billion, divided equally across the MAR2035 and JUL2045 instruments.

Meanwhile, a large OMO maturity worth ₦337.64 billion is expected on Wednesday.