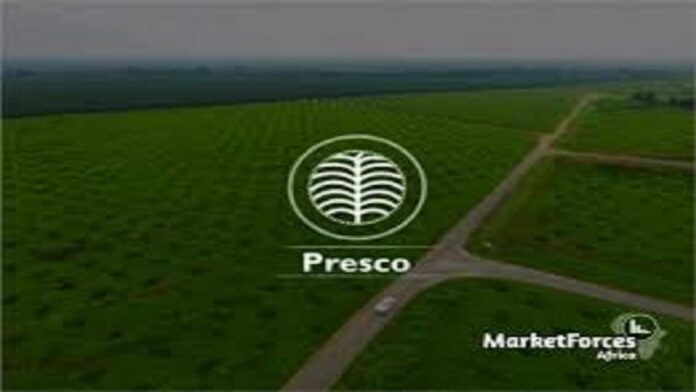 The integrated palm oil company’s share underperformed the stock market return in 2020 by 9 basis points basis points as its price return settled at 49.4%.

While the Nigerian Stock Market gained 50.3% in 2020, its share return trailed the figure by 0.9% as one of the best performing stocks in the year.

Meanwhile, it has been spending its cold, hard cash on capital investment as a way to enjoy earnings diversification and business expansion.

Despite this, the company which is the largest and most diversified crude palm oil (CPO) manufacturer in Nigeria scores hold rating from analysts.

Comparably, the company which operates in a largely oligopolistic market is trailing its competitor, Okomu Oil, in terms of market share at 60:40, according to analysts.

In its result, it was noted though demand increased, but revaluation gain lifted the company’s earnings growth in the latter part of financial year 2020.

Meanwhile, analysts explained that the company’s EPS was supported by 21.2% growth in turnover and a biological asset revaluation gain of ₦2.05 billion.

“We maintain our HOLD rating on the ticker”, analysts at Chapel Hill Denham said in its equity report.

The company recorded a moderate increase in sales in the period following the outbreak of coronavirus pandemic lockdowns and civil unrest in 2020.

This came behind analysts at Chapel Hill Denham estimate as the firm had forecasted Presco to deliver revenue of ₦24.30 billion.

“We believe the solid expansion in revenue was on the back of the favourable border closure policy (now cancelled), which limited the supply of crude palm oil (CPO) and its derivatives in Nigeria.

“From a price perspective, our channel checks indicate that the stronger demand for CPO (and its derivatives) has driven prices higher by about 20% in 2020.

“We expect increased disclosure on the transformation across the business segments as well as actual data on the volume/price mix, when the audited financial statement for 2020 is published”, it added.

Presco was able to manage its cost of financing well as the company recorded sustained decline in finance cost in the year.

In Q4-20, the palm oil company’s finance cost fell by 61.2% year on year to ₦315 million, towing a similar pattern as observed in earlier quarters.

As a result, the company’s finance costs in declined by 28.0% year on year to ₦1.54 billion, analysts at Chapel Hill Denham link these sustained decrease to two factors.

Reduction in finance cost was driven by two legs of the equation Vis a Vis the company’s debt size and lower interest rate environment in the country.

Confirming these, analysts said Presco has reduced its total borrowings by 17.5% year on year to ₦20.42 billion.

Presco hold rating signals weak sentiments towards the company’s earnings position as margin remains vulnerable to revaluation gain which is not expected to happen always in all the financial year.

While operating margins compressed due to cost pressures, it was observed that the revaluation gain helped motorise a robust growth in EPS.

These lifted the company’s operating margins.

Analysts believe that the increase in operating cash flow was lifted by stronger earnings including cash backed sales, in addition to a cash conservative working capital management.

However, on the negative side, inventories rose by 10.7% in the year to ₦3.64 billion, indicating higher unsold goods at close of the year.

Also, the management paid suppliers better as reflected in 10.”% declined trade and other payables to ₦7.34 billion.

Expressing concern over the result, Chapel Hill Denham stated that the company’s was faced with high cost pressures in Q4-2020.

“Nonetheless, we expect cost pressures to be higher in Q4-2020 as it is the peak harvest season for a typical palm oil tree”, analysts explained.

In 2020, Presco share was noted to be among tickers with best price return, advancing by 49.4% year on year against the backdrop of the impressive growth in turnover & EPS across the quarters in 2020.

Presco’s business model ensures it operates across all segments of the palm oil value chain, with the company producing and selling CPO, PFAD, RBD and Palm Oil Stearin & Olein.

The integrated crude palm oil manufacturer is the only listed company with this product’s specialty, analysts stated.

This indicates additional revenue streams for the business, which will be foreign currency dominated (via export sales).

The global demand for rubber will remain firm as long as the number of motor vehicles produced and sold continue to grow.

An average rubber seed takes around five (5) years to mature and become productive, compared to three (3) years for the oil palm seed.

“Going forward, we expect to see continued improvement in the topline of PRESCO has the company recently concluded plans to diversify the business in a bid to play in the rubber and cocoa markets.

“We see this move as a positive development for revenue, considering as we believe that it will helps the broader base for revenue.

“The move also presents an opportunity for forex earnings. According to the management, the rubber production will be 100% exported”, United Capital said in a report.

All in, analysts at Chapel Hill Denham said they expect Presco to record a resilient operating result in 2021, driven by higher volumes on the back of a recovery in demand from FMCGs.

Equity analysts at the investment firm however retain Presco hold rating rank with 12-month target price of ₦71.24 per share.

For Okomu Oil: Analysts say Rebound is on the Horizon