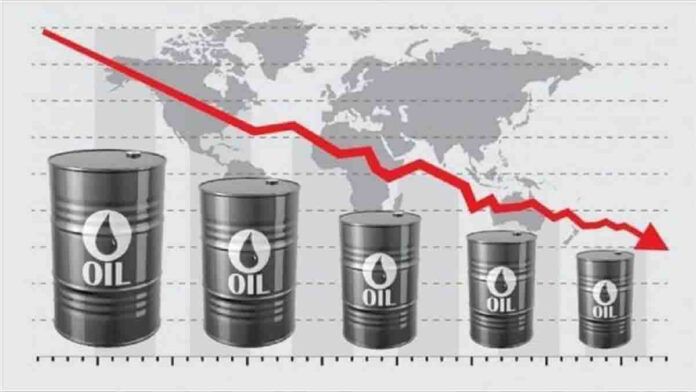 Oil prices slide on Thursday over the double whammy of the rising value of the United States dollar, as the country’s Federal Reserve indicated it would raise interest rates sooner than expected, and a surprise rise in US fuel stocks, signalling sliding demand.

Recall, oil made fresh foray near $75 a barrel on Wednesday amidst global demand optimism fuel by strong record of vaccinations in Asia, Europe and America.

International benchmark Brent crude traded at $74.02 per barrel after falling by 0.49% from $74.39 a barrel on Wednesday. Also, American benchmark West Texas Intermediate (WTI) traded at $71.81 a barrel at the same time for a 0.47% drop after ending the previous session at $72.15 per barrel.

The price of crude began declining soon after the Fed signaled that it would raise interest rates in 2023 to tame rising inflation, which prompted a stronger US dollar and discouraged cheap dollar oil trade.

After the rate cut, the US dollar index, which includes a basket of currencies like the euro, Japanese yen, British pound, Canadian dollar, Swedish krona and Swiss franc, closed Wednesday with a 0.96% rise.

Oil prices also came under pressure after the US Energy Information Administration (EIA) announced Wednesday that the country’s gasoline inventories rose by 2 million barrels, or 0.8%, during the week ending June 11, indicating lower demand.

Crude oil inventories, however, decreased by 7.4 million barrels, or 1.6%, during this period.

Not all bad news for the oil market as Fitch ratings makes an upward revision to its estimate for 2021 after spotting new trend in the crude market.

The agency now forecast that Brent price would average $55 a barrel in 2022, up from $53 a barrel in its previous estimate, while the forecast price of WTI increased from $50 a barrel to $52 a barrel.

Some oil analysts said Fitch maintains conservative position which could again warrant another round of upgrade to its forecast as global economic heals.

MarketForces Africa reported that Goldman Sachs sees oil selling at $80 per barrel in 2021 while OPEC+ remains optimistic about demand outlook.

What this means is that demand has not peaked, supporting OPEC+ optimism despite threat of Iranian oil coming into the space.