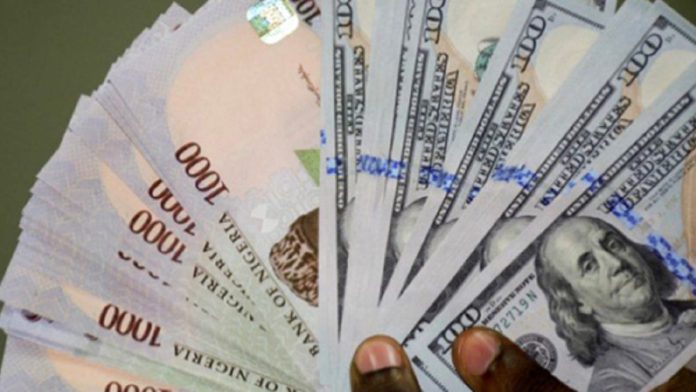 Naira, the Nigerian local currency, regained balance in what appears like a recovery from a downturn in the foreign exchange (FX) markets due to a slowdown in foreign currency inflows into the market. Dollar inflows have continued to trail pre-pandemic levels as foreign investors see no attraction in Nigeria’s economy.

This is happening despite the continuous rise in demand for foreign goods and services by Nigerians: corporates, governments and individuals, pushing demand for foreign currencies upward, thus creating a disequilibrium position that is disadvantageous to Naira.

At the Investors’ and exporters’ foreign exchange window design for allowable transactions for manufacturers and others, the local currency was exchanged at N461.50 on Friday amidst expected devaluation.

Last week, market data shows that the volume of dollars transacted at investors’ window improved by 23.9% or $115.7 million to $599.7 million ahead of Nigeria’s monetary policy committee meeting in the week.

On the other hand, in the parallel market, the naira depreciated by 2% to ₦757.00 as demand for the greenback surged. FX data shows that the exchange rate had worsened to N462 per dollar before it moderated.

When compared with an exchange rate record for the previous week, the naira lost 0.07%. The weakness of the local currency was driven by a slump in United States (US) dollar inflows against the level of demand seen in the market.

Market participants are not optimistic about the naira rebound in the short to medium term and a large number of FX analysts have maintained a stance that the local currency will be devalued as market pressures continue to grow.

Naira has depreciated by an average of 4 -6% over the last 5 years, a trend expected to continue in 2023, Cardinalstone partner said in its latest macroeconomic outlook.

“We project the official rate to devalue to N500 in 2023, with the parallel market set to remain at a premium to the official rate on the impact of election-related activities and unmet demand from official sources”, the multi-asset investment firm added.

The CBN has initiated FX generating scheme to balance its market position and keep the exchange rate steady with strong foreign exchange inflows. Declining inflows of foreign currencies have been the elephant in the building for monetary policy exchange rate policy.

With various schemes, the apex bank has continued to struggle to attract dollars and other foreign currencies into the country. The CBN said rebates in the investors’ and exporters’ FX window attracted strong FX inflows through 2022.

When compared on a quarterly basis, inflow into Nigeria declined 5.54% in the second quarter of 2022, which analysts maintained to be significantly below pre-pandemic levels. >>>Inflation Rate Drops to 21.34% in Nigeria

In its market outlook for 2023, Meristem Securities said the impact has been mild due to deteriorating economic conditions in major countries where diaspora inflows have been significant in the past.

“We believe the FX liquidity issues will remain over the short-to-medium term as we do not see any positive signal that denotes an improvement in FX supply relative to the pre-pandemic levels”, analysts at Cordros Capital said in a market report.

Meanwhile, the rate appreciated by +1.9% to N500.42 for a 6-month contract. # Naira Holds Position as External Reserves Rise