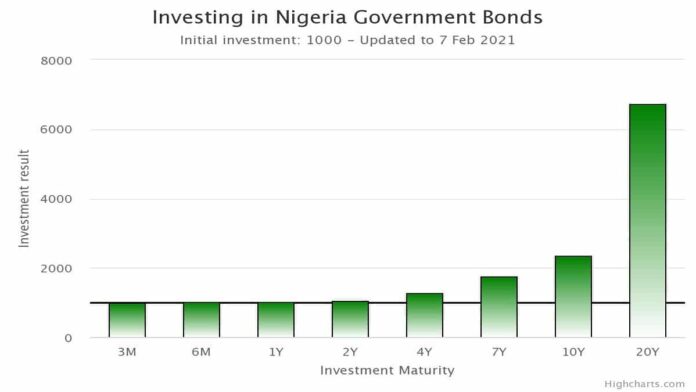 The fixed income market investors have continued to register their dissatisfaction with rates at both the primary and secondary markets for Treasury instruments, Meristem Securities Limited said in a report.

It said the corporate end of the market has remained relatively quiet despite the opportunity presented by the current low yield environment.

In the Treasury bill space, there was strong demand in the primary market amid a bearish secondary market.

“It was a generally uneventful month in the Treasury bills market as investors continued to register their dissatisfaction with rates at both the primary and secondary markets”, Meristem stated.

For example, at the primary market, the Central Bank of Nigeria, CBN, on behalf of the Federal Government, conducted two auctions in January during which bills worth a total of ₦419.65 billion were offered to the investing public but only 68.91% on offer was realized.

Meristem noted that this was despite strong subscription rate with bid-to-cover of 1.99x by investors during both auctions.

“Our view is that the FG was wary of high borrowing costs which was also why 364-Day bills worth ₦125.14 billion were redeemed at the first auction for the month”, analysts stated.

Range of bids was noticeably high during the first auction but there was a significant decline at the second auction on the back of the latest decision of the Monetary Policy Committee.

Nevertheless, analysts noted that average stop rates increased significantly across all tenors during the month.

At the secondary market, the mood was largely bearish as average yield increased to 0.88% at the end of the month from 0.50% as at the end of December.

The weakening demand for T-bills in the secondary market during the month is attributed to the low yield environment which when considered against the soaring inflation rate results in negative real returns.

Investors have therefore shown preference for equities which recorded a gain of 5.32% in January.

Meristem said there was one primary market bond auction during the month which attracted a total subscription ₦238.28 billion against an offer size of ₦150 billion composed of reissues.

As with Treasury bills, marginal rates were higher in January than in December 2020, an indication that investors demanded for higher coupon rates relative to the previous month.

However, the Debt Management Office, DMO, maintained the original coupon rates on the instruments across all tenors.

At the secondary market, it was noted that demand for bonds waned as average bond yield increased to 7.97% at the end of January from 6.06% during the last trading session in December 2020.

The bearish sentiment witnessed during the month was also due to low yields, which is inadequate to compensate for the prevailing inflation rate.

Despite the relatively low yield environment, activities on the corporate end of the market have been rather muted so far in in the year.

“We note however that several corporates have not yet commenced a new budget cycle, and that issuances typically fall within the second half of the year”, Meristem stated.

The only event of note was the conclusion of BUA Cement Plc.’s issuance of its ₦100bn Series 1, 7.50% Fixed Rate Bond.

Analysts explained that the bond which is due in 2027 was oversubscribed by ₦37.82 billion.

“This is a positive development which demonstrates Nigeria’s capacity to meet its obligations”, Meristem added.

In reaction, analysts said the market went bullish on Nigeria’s outstanding Eurobonds as yields declined across tenors following this development.

“We note that the next FGN Eurobond maturity is due in June 2022 with an outstanding value of USD300 million”, the firm added.

“Although high debt servicing costs continue to cloud Nigeria’s credit outlook, the recent payout to Eurobond investors and the relatively improved oil revenue outlook should count towards a better credit rating and hence a lower cost of borrowing”.

Meristem explained that the current yield trend in the domestic treasury fixed income market is obviously a reversal of the downtrend witnessed last year.

“Nevertheless, the yield environment remains relatively depressed and is expected to remain so for at least the first half of the year”, it added.

This position is further supported by the recent decision of the MPC to maintain status quo until March 2021.

Analysts also said they do not envisage any further significant increase in stop rates as system liquidity is expected to remain elevated over the near term.

“Thus, while demand at primary auctions will remain strong, driven by conservative investors such as Pension Fund Administrators, demand at the secondary market is expected to remain weak.

“We maintain our recommendation that investors should consider investment grade corporate bonds and commercial papers in their quest for above-average returns”, Meristem stated.