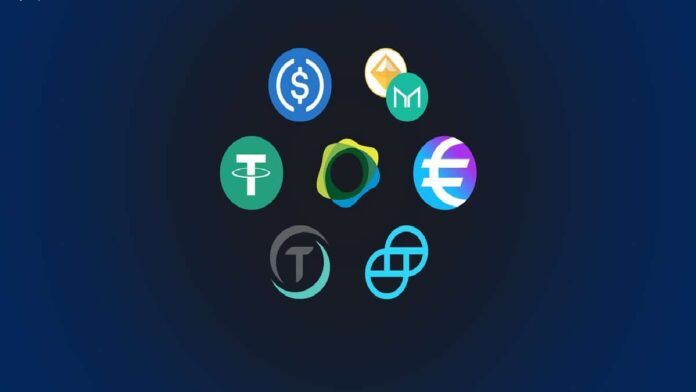 UPDATED: Stablecoins, a type of digital currency, have broad potential within banking and finance, and for the overall economy, as a way to process payments, develop new products and bridge the gap between physical and digital currency.

They also entail new risks that could undermine financial stability and monetary sovereignty if adopted at a significant scale without a strong regulatory and oversight framework. In this report, we answer frequently asked questions about the risks and opportunities related to the growth of stablecoins.

What are stablecoins, and how do they differ from cryptocurrencies and central bank digital currencies (CBDCs)? For a currency to be viable, it must offer enough confidence in its ability to act as a medium of exchange to effectively enable transactions.

Unlike cryptocurrencies, which are highly volatile, stablecoins are an attempt to create private digital currencies tethered to a fiat currency or a stable asset that is less volatile, while allowing for the convenience of cryptocurrency by means of instant consensus-based settlement and privacy.

Therefore, a stablecoin can be defined as a value-stable digital currency whose market price is backed by a low-volatility based stable asset. Stablecoins also differ from central bank digital currencies (CBDCs), which are digital representations of legal tender and direct liabilities of the central bank itself.

In contrast to CBDCs, stablecoins are a private-market digital alternative to fiat currency in terms of a reliable medium of exchange. Stablecoin transactions occur without a bank intermediary, enabling instantaneous settlement between transaction parties, regardless of geographic location.

They have the potential to bring about more competitive economic markets by offering improved efficiency and broader financial inclusion under a regulatory framework and provide new benefits and lower costs to cross-border payment transactions given their ease of use for international money transfers.

Though a number of stablecoins are currently in circulation, Facebook’s vast social media network will provide the payment system for cross-border transactions with a significant and large global user base.

Do stablecoins have the potential to disintermediate banks and financial services companies? If widespread adoption of stablecoins occurs, the development of alternative payment networks using stablecoins could pose disintermediation risks to payment providers and money transfer agents.

These risks include the loss of interaction with their customers and the potential for lower fees that banks and payment providers receive for processing debit and credit card payments.

In assessing the role of stablecoins, bank regulators will likely balance the need to make room for societal benefits from technological advances and innovation, including the efficiencies such advances will bring, on the one hand, and safeguarding the stability of the financial system on the other.

In January 2021, under the Trump administration, one of the three major US bank regulators took action that could allow stablecoins to gain traction among US consumers.

The Office of the Comptroller of the Currency (OCC) indicated that US banks can use stablecoins and independent node verification networks (INVNs) to facilitate payments on behalf of customers.

This flexibility could lay the groundwork for stablecoins to become an alternative payment system, alongside global payment networks such as SWIFT and ACH.

The OCC guidance did stipulate that banks should make sure stablecoin activities are consistent with all applicable laws, including anti-money laundering laws.

However, the OCC under the Biden administration has indicated it intends to review this guidance.

In announcing the review, the recently appointed Acting Comptroller of the Currency expressed concerns that the OCC guidance was not made in full coordination with all stakeholders and that it needs to be viewed as part of a broader strategy to help coordinate regulatory actions governing stablecoins and their relationship to the financial system.

In recent remarks, Federal Reserve Chairman Jerome Powell and Federal Reserve Gov. Lael Brainard expressed concerns that stablecoins could create fragmentation within the US payment system, and that such new forms of private money could introduce counterparty risks that lead to broader stability risks.

Why has the adoption of stablecoins prompted dialogue on monetary sovereignty and financial stability? In the wake of the development of global stablecoins and given potential competition from entities with significant global scale, central banks worldwide are launching or planning to launch CBDCs to help reinforce sovereign control over monetary policy.

Central banks could also have reason to worry about financial stability. Because stablecoins are managed by private entities, they are subject to credit and collateral risk, unlike the most widely used fiat currencies.

Some stablecoins, because of their unregulated and opaque nature, could also be subject to governance weakness and fraud risk.

In addition, stablecoins are not regulated instruments, and are not subject to reporting or regulated disclosure, which could lead to opacity and risks surrounding liquidity and collateralization.

As usage increases, regulators will focus on developing appropriate regulatory and oversight frameworks to address risks that stablecoins may pose to the existing financial market infrastructure.

What types of risks are associated with stablecoins?

A primary risk resulting from the adoption of a widely used global stablecoin could be the shift of purchasing power from a “public good” (sovereign money) to a “club good” (payment services offered to a select group of people in exchange for platform membership and personal data), as explained by Fabio Panetta, a member of the European Central Bank’s Executive Board.

In particular for emerging economies, wide adoption of fiat-collateralized stablecoins (those pegged to a single or basket of currencies) could pose monetary policy risk in the event that the national currency is not a part of the collateral (or currency basket) backing stablecoin-denominated deposits.

In this situation, stablecoins pegged to a basket of foreign currencies could become widely used as payment and savings instruments, reducing the effectiveness of monetary policy.

Additionally, a sovereign could lose control over currency in circulation and demand deposits if a stablecoin using underlying technology governed by a different country gains traction and draws users away from the sovereign’s currency.

The private companies that issue stablecoins are subject to weaker regulation than banks, which will introduce counterparty risk if the current regulatory regime does not catch up with the development and broader application of stablecoins.

Stablecoins could also be subject to general creditors’ claims should the stablecoin issuer become bankrupt. In addition, if not addressed, regulatory gaps could increase the risk that stablecoins will be used for illicit financial activities.

» misuse of personal information in data-driven models, in which payment services are provided free of charge in exchange for personal data

» investor losses as a result of a lack of regulation and oversight In an example of the risks related to stablecoins, Tether, one of the largest stablecoin issuers, agreed in February 2021 to pay $18.5 million to settle allegations by the New York Attorney General that it failed to disclose $850 million in losses to investors and had insufficient cash reserves to back up its digital currency in circulation.

In May 2021, Tether disclosed some information on the composition of its holdings for the first time since the company’s inception in 2014.

The breakdown of Tether’s holdings, which provided only limited detail, showed that reserves were not backed directly by risk-free US dollar collateral.

According to Tether, about 75% of reserves were in cash and cash equivalents, other short-term deposits and commercial paper.

About 65% of the cash component consisted of commercial paper. No information was provided on the ratings of the commercial paper or corporate bonds or the entities that issued them.

What is the regulatory framework around stablecoins?

As stablecoins attract more attention and have potential for global reach, they are increasingly drawing scrutiny from regulators, policymakers and central banks with regard to their financial stability implications

The Financial Stability Board (FSB) in October 2020 published high-level recommendations for the regulation of global stablecoins and will likely issue further guidance.

The FSB report made clear that most jurisdictions do not currently have regulatory analysis frameworks specific to stablecoins. Instead, existing regulatory, supervisory and oversight approaches that apply in whole or part can address some of the risks associated with stablecoins or with entities that are part of the stablecoin ecosystem.

The FSB’s review of the challenges to the implementation of its high-level recommendations on global stablecoins has received support from G-7 finance ministers and central bank governors, who have also announced that no global stablecoin project should go into operation until it adequately addresses the relevant legal, regulatory and oversight requirements.

Recent remarks by Christina Segal-Knowles, executive director for Financial Markets Infrastructure at the Bank of England, highlight that with proper regulations, stablecoins could increase the resilience of payments and also potentially have benefits for financial stability.

Regulatory authorities and policymakers are looking at possible global use of digital currencies and other related challenges (for example, anti-money laundering and cybersecurity).

However, some recent regulatory and policy announcements have led to discussions about the potential for extensive use of stablecoins in the future.

How are stablecoin transactions verified over independent node verification networks (INVNs) and what are some of the related risks?

Stablecoin transactions are conducted via INVNs, which are shared electronic databases that record and validate the same encrypted information on multiple computers in a shared network in real time.

Distributed ledger technology, like blockchain, is a common form of INVN.

Every participant within an INVN is considered a “node” and requires specific hardware in order to be a host node of a network or to become a participant (or validator) node in an existing network.

A node in a distributed network fundamentally performs similar actions, driven by a consensus mechanism11 and smart contracts12 that central authorities currently handle, such as storing, transmitting and validating information for transactions.

INVNs enable a much faster, efficient and more transparent mechanism for these same functions. Within INVNs, different types of nodes verify transactions.

The most common types used for payment activities using stablecoins are:

» full nodes, which act as a server and whose main purposes are to verify transactions, establish and maintain consensus mechanisms, and vote on proposals; and

» lightweight nodes, which are meant to interact with full nodes and query the necessary information for simple day-to-day payment verification operations.

Do the benefits of stablecoins outweigh the costs?

The proposed advantage of stablecoins is to offer a faster and stable digital medium of exchange by backing them with collateral, typically fiat currencies.

However, stablecoins also bring a variety of risks and concerns – for example, one risk is that stablecoins could be used for potential market manipulation, particularly if there is a lack of transparency around the supply and distribution of stablecoins by the issuer.

Another concern is that it may not be possible to verify the level of collateral reserves that stablecoins maintain. Furthermore, if stablecoins are brought within the structure of regulated banks or other financial institutions, subjecting stablecoin transactions to financial regulation, the decentralization and anonymity that users of blockchain-based technologies see as a benefit could be lost.

There are nonetheless likely to be some cases in which the benefits, such as lower transaction costs and faster transaction speeds for users and the stablecoin sponsor, will outweigh the costs. This could particularly be the case for stablecoins that are designed to serve a large global user base already in place.