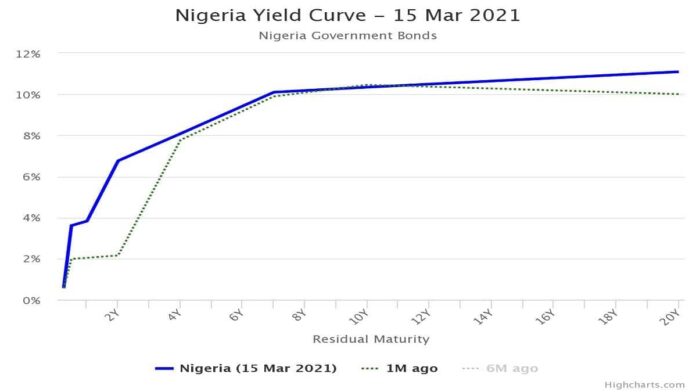 In the money market segment, interbank funding rates were elevated at double digits all through the last week, mainly due to weak level of inflows into the financial system.

The weak level of liquidity, as well as the bearish Nigerian Treasury Bill auction, pushed discount rates on the T-Bill and open market operation (OMO) benchmark curves upward by an average of 85 basis points (bps) and 44bps to 2.38% and 6.43% respectively.

At the rollover NTB auction which held last week, the Central Bank of Nigeria (CBN) offered a total of N88.91bn across three tenors, while investor demand was healthy at N196.85bn.

This implies a bid-cover ratio of 2.2x, up from 1.4x previously. Chapel Hill Denham said the CBN eventually sold N108.77bn to take advantage of the decent demand.

“This week, specifically tomorrow, 16th March, the NBS is expected to publish the January Consumer Price Index (CPI) data, which we expect to show a further increase in Nigeria’s headline inflation rate.

“Although we expect month-on-month CPI growth to moderate to 1% from 1.5%, due to improvements in food supply following the border reopening, we expect year-on-year headline inflation rate to print higher by 24bps to 16.71% year on year due to low base effect”, it added.

Over the near term, analysts at Chapel Hill Denham said they expect inflationary pressures to persist, until high-base effect and impact of strong harvest set in over H2-2021.

Last week, Moody’s upgraded Republic of Benin to B1 from B2, despite rising political risk ahead of elections holding next month, citing solid track record of fiscal consolidation and improvements in the structure of debt.

Chapel Hill Denham however noted that the outcome of the U.S. Fed meeting will likely have material impact on pricing of high yield debt this week.