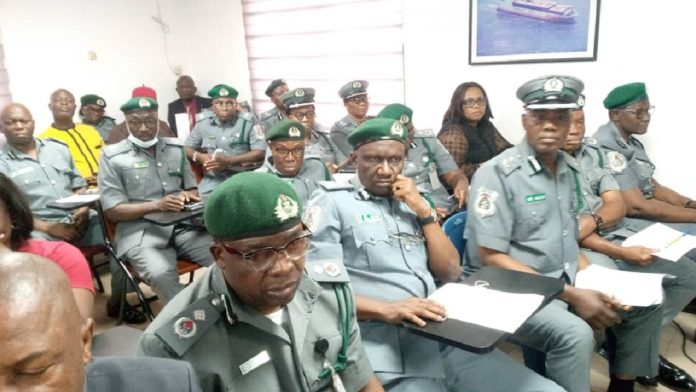 This represents an increase of five billion, three million, seven hundred and ninety-nine thousand, two hundred and forty-three naira only. (N5,003,799,243.00) over the revenue generated in the prior year.

Speaking at a briefing held with Maritime Journalists on Tuesday Morning, the Customs Area Controller PTML Command, SULEIMAN BOMAI, disclosed this adding that despite the recorded downtime occasioned by agents strikes and an alleged inability by some importers to clear their vehicles from the command, it was able to surpass 2021 revenue with an increase of two point two percent.

To him, “Last year had a significant impact on Ports and Terminal Multiservice Limited (PTML) on the ground that the nature of our operational area makes us deal more on vehicular cargoes (Roll-on Roll-off) and we were impacted by trade policies that affect automobile importation like the Vehicle Identification Number (VIN)”.

“As a customs command, we employed dialogue with our strategic stakeholders on the need to understand the basis of VIN valuation and engaged them severally to solicit their cooperation. We also strengthened our relationship with our strategic partners who are sister government agencies in the port.

“Our robust interface with private sector stakeholders and government agencies is ongoing in procedures. It is important to state that implementation of all government policies and directives are ongoing with an increasing degree of compliance being recorded so far, he said.

However, the Customs Area Controller described the absence of non-functional Scanners in the Command and inadequate space as major challenges facing the command but anticipated that in future, the Port and Terminal Multiservice Limited (PTML) management and various bonded warehouse operators will help expand our spaces to enhance customs operation

He later expressed deep appreciation to the Comptroller General of Customs, Col. Hameed Ibrahim Ali (Rtd) CFR and his entire management team for the support saying “we have enjoyed, their inspiring leadership, giving us direction and guiding us aright.

“Our achievements as a command is a fallout of the cumulative efforts of our officers and men with the cooperation of our strategic partners and strategic stakeholders. I also want to appreciate them all for their support and cooperation throughout the year 2022,” he concluded. # PTML Customs Generates N229.5bn Revenue in 2022