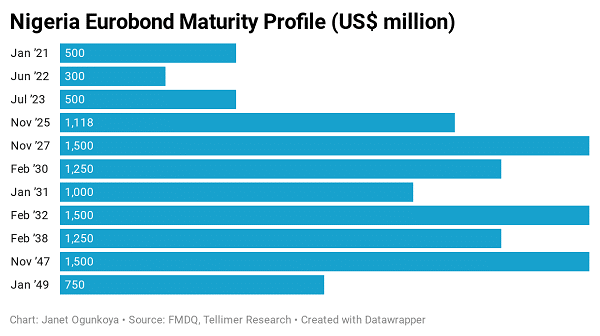 An Emerging market investment firm, Tellimer, has said that Eurobond issuance is unlikely despite the fact that Nigeria has a record high fiscal deficit.

In its macroeconomic note, the firm said the fiscal deficit for 2021 is more likely to be financed domestically than via Eurobonds.

Recalled that the Director General of the Debt Management Office has said that a foray into the Eurobond market would depend on “yields, tenors and level of demand.

Lower interest rates environment has made domestic borrowings cheaper in the recent time, with low yields in the fixed income market.

The last Eurobond issued by the country was conducted in 11-month of the fiscal year 2018.

The nation’s $500 million January 2021 Eurobond is however expected to be settled as foreign exchange scarcity persists.

Chapel Hill Denham projected that due to lower accretion into the external reserves, government may issue Eurobond in the first quarter of 2021 to refinance the borrowing.

But Tellimer said despite the increased deficits, federal government’s borrowings are likely to be sourced domestically, via treasury bills and bonds than via Eurobonds.

Explaining its view, Tellimer said the domestic market has been flooded with liquidity, since the Central Bank of Nigeria banned domestic non-bank participation in OMO bills in October 2019.

This resulted in a plunge in fixed income (T-Bills and bonds) yields to record lows and, and Tellimer believes that this would make a cheaper source of borrowing for the federal government than Eurobonds.

In addition, the lingering uncertainties in Nigeria’s FX environment and in global crude oil prices have scarred Nigeria’s attractiveness and would likely warrant higher pricing by foreign investors.

“It is worth noting that a Eurobond of US$500 million is expected to mature in January 2021.

“We think Nigeria should be able to finance the maturing Eurobond from its reserves”, the firm stated.

President Buhari presents a record-high ₦13.08 trillion budget to the National Assembly. Detail of the proposed spending plan for 2021 has its deficit side projected at ₦5.19 trillion compared with ₦4.97 trillion in 2020

Even with the higher deficit, Tellimer said federal government borrowings is more likely sourced domestically than via Eurobonds

President Buhari presented the 2021 budget to the National Assembly yesterday, with the aim of ensuring approval before the end of the year, as happened with the 2020 budget.

This is a relatively new development because prior to last year, budget approval was often delayed.

This brings the proposed fiscal deficit to ₦5.19 trillion (3.5% of GDP), which analysts consider as one of the highest on record.

Next year’s deficit is to be financed via new borrowings of ₦4.28tn, ₦205.15bn of proceeds from privatisations and ₦709.69bn of multilateral and bilateral loans.

Tellimer said 2021 fiscal deficit is likely to print even higher than projected as the federal government has been known to miss its revenue targets.

Especially for non-oil revenue with series of record misses over the years.

In the first half, Nigeria’s fiscal deficit was already 13% higher than the pro-rata projection for 2020, at ₦2.8 trillion, accounting for 4.03% of gross domestic product.

Point and Kill Investing Hurts, Things to Consider Before Opening Your...