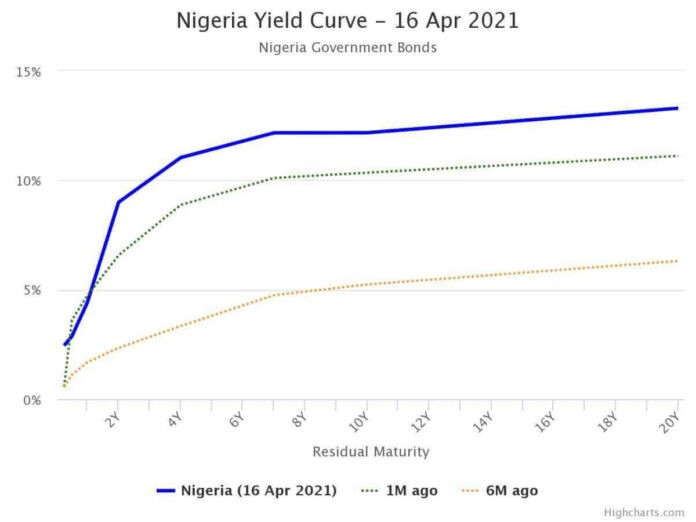 The National Bureau of Statistics reported that headline inflation rate jumped 18.17% year on year in March, marking 19 consecutive month on month uptrend from 17.33% reading for February.

In the bills segment, discount rates on benchmark Nigerian Treasury Bills (NTBs) closed marginally lower by an average of 3 basis points (bps) to 3.75%.

Analysts at Chapel Hill Denham said this was solely due to repricing of AUG 21 paper which fell 36ps to 2.80. However, the open market operations (OMO) curve expanded by an average of 15bps to 6.65%.

Similarly, in the bond market, the benchmark yield curve expanded by an average of 29bps to 12.27%, due to repricing across the curve.

On Friday, financial system liquidity opened in surplus of N49 billion compared to a deficit record of N219.9 billion yesterday.

However, funding pressures increased, as a result of provisioning by banks for the retail foreign exchange (FX) auction, according to analyst at Chapel Hill Denham.

“Funding pressures will likely ease next week, although money market rates are expected to remain elevated at double-digit. On Tuesday, N46.8 billion worth of OMO bills will mature”, analysts said.

Next week, Chapel Hill Denham hinted that all eyes will be on the bond auction scheduled to hold on Wednesday, April 21.

Analysts noted that the last auction cleared at 10.50%, 11.50%, and 12.00%, saying odds are in favour of substantially higher marginal rates at the upcoming auction, possibly in excess of 150 bps.

In related development, the Nigerian local currency, Naira, continued to trade within a tight band at all segments of the FX market.

In the Investors and Exporters Window, the local currency weakened marginally against the United States dollar by 0.12% or 50 kobo to close at 411.00.

In the parallel market, the Naira traded flat against the greenback at 482.00 while the nation’s external reserves sustained a recent upward trend, climbing to a 6-week high of US$35.20 billion (+1.1% month-to-date) on 14th April 2021.