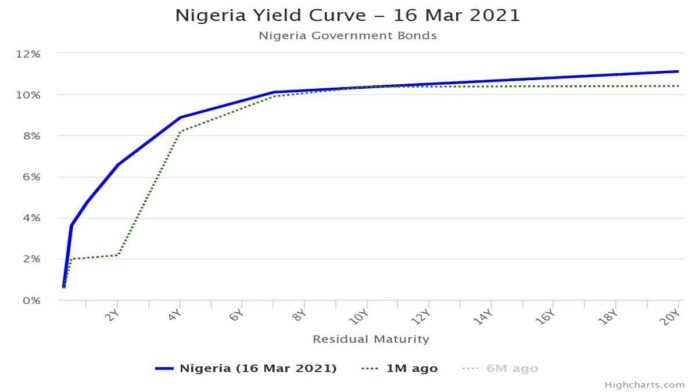 Yields on Treasury Bills Rise ahead of CBN Auction

Yields on Treasury Bills rose 30 basis points ahead of the Central Bank of Nigeria (CBN) Primary Market Auction (PMA) tomorrow to average 3.1%. Greenwich Merchant Bank hinted that the bearish close was due to selloffs across the intermediate and long end of the curve.

It said at the last PMA, stop rates for the 91 and 182-Day instruments remained unchanged while that for the 364-Day instrument increased by 100 basis points to 6.50%.

However, this development marked a deviation from the trend of higher stop rates across all instruments on offer since the beginning of the year.

“Our view is that the government may be putting a lid on interest rates to minimize the burden of repayments.

“Recall that we had earlier expressed our concern about the government’s ability to cope with higher interest rates given its weak, albeit improved revenue outlook”, Meristem stated.

In the previous auction, analysts noted that investors ‘appetite strengthened significantly as overall bid-to-cover ratio increased to 1.81x from 1.51x.

“We note that the current wave of selloffs in the equities and secondary T-bills market have been key drivers of demand at the PMAs.

“At the next auction therefore, we expect stop rates to hover around current levels given that demand is expected to remain strong and the offer size is relatively smaller”, the firm explained.

It added that the secondary market has continued to witness bearish sentiment since the last PMA, with average Treasury bills yield rising from 2.54% recorded on the date of the last auction to 2.72% as at 12th March 2021.

“We generally expect that yields will continue to rise as investors seek to minimize capital losses in view of the uptrend in interest rates.

“Also, higher rates offered at PMAs should spur investors to give up their current positions in order to enjoy higher interest rates” Meristem said.

In the money market, funding pressures eased slightly in the interbank market, against the backdrop of OMO maturities (N113bn) which lifted financial system liquidity higher to N192.4bn at market open, from a deficit of N72bn yesterday.

In the bills market, the Nigerian Treasury bill benchmark curve expanded by an average of 26bps to 2.78%, mainly due to repricing of long DTMs (+64bps to 4.37%).

Also, open market operations (OMO) benchmark curve expanded by an average of 28bps to 6.89%, due to repricing across the curve.

However, bond yields closed flattish at an average of 10.10%, despite the higher-than-expected February 2021 inflation print.

The report showed inflationary pressures accelerated in the month, as headline inflation rate climbed by 87bps to a 4-year high of 17.33% year-on-year.

“This is way ahead of our forecast of 16.7% year on year and consensus expectation of 17%.

“We maintain our view that inflationary pressures will remain persistent over the near term, particularly in view of the impending increase in the prices of PMS (petrol).

“Notwithstanding, we expect to see inflation rate moderate by H2-2021, due to relatively stable FX rate and high base effect”, Chapel Hill Denham stated.

Yields on Treasury Bills Rise ahead of CBN Auction