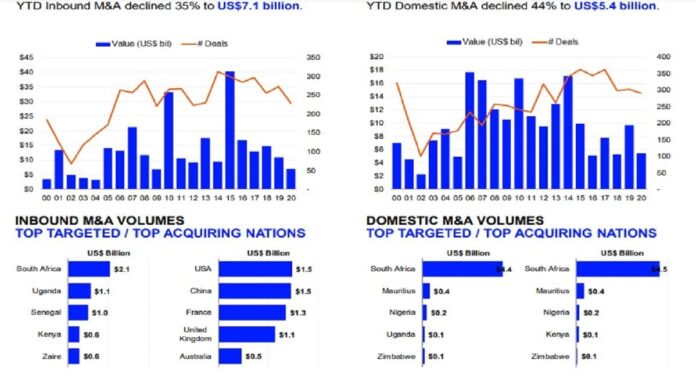 An estimated US$523.7 million worth of investment banking fees were earned in Sub-Saharan Africa during 2020, down 15% from 2019 and the lowest annual total in six years, says Refinitiv in a report.

According to Refinitiv, fee declines were recorded across merger and acquisition (M&A) advisory, debt capital markets underwriting, and syndicated lending.

It said that advisory fees earned from completed M&A transactions generated US$108.3 million, down 55% year-on-year to the lowest level since 2013.

“Debt capital markets underwriting fees declined 13% to US$64.9 million, a four-year low, while syndicated lending fees fell 3% to US$263.0 million.

The financial data provider stated that fees generated in the energy & power sector account for 26% of total investment banking fees earned in the region during 2020.

This indicated a 10% increase during the same period last year, while the financial and technology sectors account for 17% and 13% respectively.

“South Africa generated the most fees in the region, a total of US$279.9 million accounting for 53%, followed by Mozambique with 14%.

“Boosted by lending fees, Sumitomo Mitsui Financial Group earned the most investment banking fees in the region during 2020, a total of US$57.3 million or an 11% share of the total fee pool”, it said.

In the report, Refinitiv hinted that the value of announced M&A transactions with any Sub-Saharan African involvement reached US$25.7 billion during 2020.

This translates to a 62% less than the value recorded during 2019 when Naspers’ US$35.9 billion internet assets spin-off boosted merger activity to an all-time high.

It explained that the value of deals recorded during 2020 is the lowest annually since 2012. The number of deals declined 5% from last year to a seven-year low.

Also, the value of deals with a Sub-Saharan African target declined 39% to a sixteen-year low of US$12.5 billion as domestic M&A within the region declined 44% from last year.

It was added that the combined value of inbound deals reached just US$7.1 billion, the lowest annual total since 2009.

“Chemicals Company Sasol agreed to sell a US$2.0 billion stake in LyondellBasell in October, the largest deal in the region during 2020”, Refinitiv stated.

Boosted by this deal, materials was the most active sector for deal making during 2020, accounting for 23% of Sub-Saharan African target M&A activity.

The firm stated that South Africa was the most targeted nation, followed by Uganda.

“The value was boosted by Angolan state-owned Sonangol’s purchase of PT Ventures from Africatel Holdings for US$1.0 billion and Templar Investments’ US$1.0 billion offer for Jindal Steel’s Oman unit.

“With advisory work on twenty deals worth a combined U$4.4 billion, JP Morgan holds to the top spot in the financial advisor ranking for deals with any Sub-Saharan African involvement during 2020”.

Refinitiv revealed that Sub-Saharan African equity and equity-related issuance reached US$2.5 billion during 2020.

This was 54% more than the value recorded during the previous year, but lower than every other annual total since 2005.

The financial market data provider said the number of deals recorded increased 19% from 2019 but was lower than any other yearly tally since 2012.

“One initial public offering was recorded during 2020, compared to three in 2019.

The report also reads that the African Development Bank raised $3 billion in a “Fight Covid-19” social bond at the end of March to help alleviate the economic and social impact the Coronavirus pandemic will have on livelihoods and economies in the region.

“With this deal, and Ghana’s US$3 billion Eurobond in February, Sub-Saharan African debt issuance totaled US$8.9 billion during the first quarter of 2020, the second-highest first quarter DCM total in the region of all-time.

“Only US$1.9 billion was raised during the second quarter, the lowest quarterly total in eight years, followed by US$4.0 billion during the third quarter.

“Prosus raised US$2.2 billion in December, boosting fourth quarter bond issuance in the region to US$4.3 billion.

“Deutsche Bank took the top spot in the Sub-Saharan African bond underwriter ranking during 2020 with US$2.6 billion of related proceeds, or a 13% market share”, Refinitiv stated.