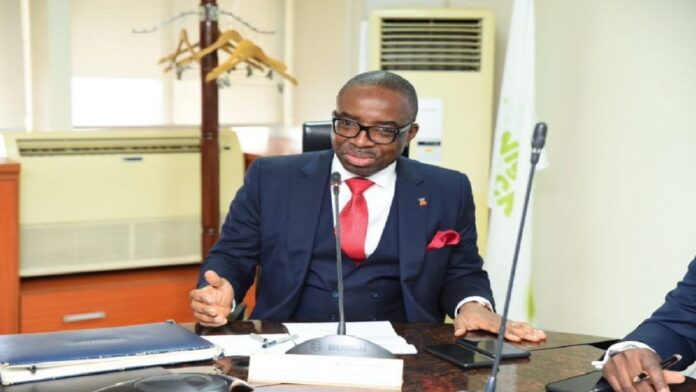 With bouquet of buy ratings across the Broadstreet, Zenith Bank – a clear front-runner in the banking sector- is enjoying analysts bullish bias anchored on strong earnings profile.

Despite virus-infected economy, lender was able to consolidate position and Vetiva Capital has projected profit after of ₦249 billion for financial year 2021.

Vetiva analysts Joshua Odebisi hinted in a report that Zenith Bank stock is trading at 30% to the firm’s target price of ₦33.22.

In the last three years, the bank has been noted to have consistently outperform the broad market and banking sector index.

Speaking to its industry’s leadership, Joshua said in the equity report that with 11% average annual growth in balance sheet over the last five years, lender has been able to support earnings growth.

Vetiva Joshua pitched is that the bank has posted 11% and 17% in top and bottom line respectively in the last five years.

“We believe the bank is on track to deliver impressive market performance in 2021”, the firm stated.

In addition to Vetiva equity report, analysts at WSTC Securities elucidated that Zenith Bank stock is trading at 70% discount to its fair value estimate.

Rated buy due to its strong fundamentals, at the current market price of ₦22.60k, the stock trades at a 70% discount to WSTC’s fair value estimate.

Analysts explained that the group’s attractive earnings profile, supported by a robust revenue base.

“As we advance, however, we expect a normalisation of trading gains as well as FX revaluation gains (the key drivers of non-interest revenue).

“Nonetheless, we expect the group to leverage its low-cost deposits to deliver competitive pricing for its risk assets, thereby boosting net interest income.

“Also, we expect the recent Securitisation of the group’s CRR debits by Central Bank of Nigeria to support margins.

“Overall, we have a fair value estimate of ₦38.34k on the stock”, WSTC Securities spelled out.

Like others, Busola Jeje, Tellimer’s analyst reiterate buying rating on the ticker at a target price of ₦35 and expected total return at 45%.

This was driven by an 11% increase in non-interest income despite pressure from the apex bank earnings dilutive policies.

However, the group’s net interest income rose year on year by 5% due to a faster decline in interest expense in 9M 2020.

This was due to what analysts call a profound decline in interest from treasury bills.

WSTC Securities noted that while interest on loans and advances, just as other investment in financial assets, revenue from treasury bills declined remarkably by 46% from ₦74.27bn in 9M 2019 to ₦40.39bn in 9M 2020.

The significant decline was due to the decrease in treasury bills rates.

Analysts stated that this was a result of the group’s effort in rebalancing of deposit mix as well as the declining yield environment.

Expressly, interest on borrowed funds declined by 32% from ₦49.15 billion to ₦33.31 billion in the period.

Also, while the group’s deposits grew year-to-date by 23%, interest on current accounts as well as savings account was flat for the period.

However, the group’s net interest margin contracted by 40bps to 8% in 9M 2020 due to the declining yield environment.

This came in addition to regulatory headwinds such as the discretionary CRR debits by the central bank.

Specifically, trading and operating income grew year on year by 34% and 53%, respectively.

Analysts explained that the group took advantage of the declining yield environment to ride the yield curve.

Also, the significant growth in other operating income was informed by FX revaluation gains, which grew by 53%.

In the period, analyst expressed that total operating expenses continued to rise due to inflationary pressure and FX rate movement.

It was noted that movement in FX rates impacted foreign currency denominated expenses.

For instance, information technology expenses (FX denominated) significantly increase by 104% from ₦7.29bn to ₦14.88bn in 9M 2020.

WSTC Securities said Consequent to the sharp increase in expense compared to income, PBT grew at a slower pace of 1% from ₦176.18 billion to ₦177.28 billion in 9M 2020.

Unilever Nigeria: Is the Company’s Stock worth Buying after Loss-making Streaks?