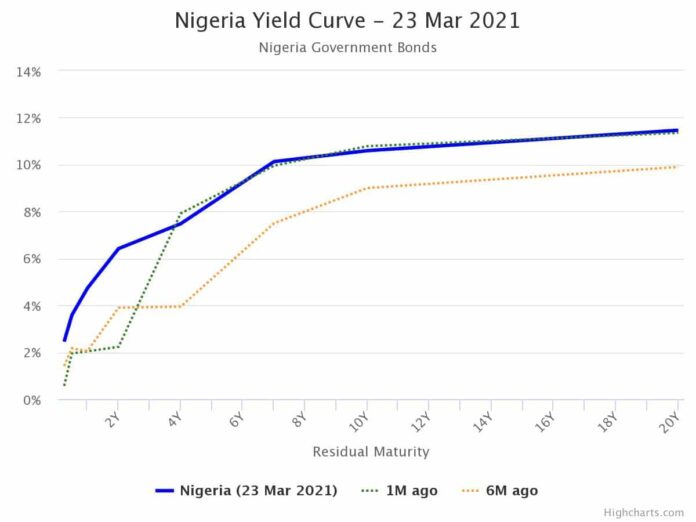 Today, average yield on Nigerian Treasury Bills swings upward to 3.5% following the bearish sentiment that pervaded trading sessions despite pockets of demand in the market.

Amidst the decision of the monetary policy committee of the Central Bank of Nigeria to hold key rates, sell-offs pushed average yields on treasury-bill instrument up by 8 basis points.

In the money market, the financial system liquidity improved slightly to N133 billion, from N107 billion yesterday. The increase was supported by N43 billion open market operations (OMO) repayment that hit the system.

This drove a slight moderation in funding rates, even as rates remained in the double digits level. Precisely, the Open Buy Back (OBB) and Overnight (O/N) rates declined by 300 basis points (bps) and 275bps to 11.50% and 12.00%, respectively.

“We expect funding pressures to continue due to the absence of any major inflow”, Chapel Hill Denham said. In the bond market, yields rose slightly by an average of 1bp across the benchmark curve to 10.16%.

This was mostly driven by upward repricing at the long (+2bps to 11.36%) end of the curve. In its second policy meeting of the year, the MPC has elected to retain all policy parameters.

“With inflationary pressures likely to remain elevated over the near term, amid large fiscal and external sector imbalances, we expect to see a further repricing of yields in the short to medium term”, Chapel Hill Denham said.

Analysts think decision will at least slow the pace of the bond market selloff and provide a relatively benign environment for government borrowing.

Greenwich Merchant Bank analysts however said they do not envisage any major impact across the financial market due to MPC decision.

Meanwhile, the foreign exchange rate remained unchanged in the official and Secondary Market Intervention Sale (SMIS) segments at 379.00 and 380.69 respectively. Ahead of the Primary Market Auction (PMA) tomorrow, bond market investors were slightly bullish on the short end.

Meanwhile DANGSUGAR (₦1.8 billion), GUARANTY (₦832.3 million) and STANBIC (₦499.8 million) led by value. In its market report, Afrinvest stated that performance across sectors under its coverage universe was bullish as 4 indicators gained.

Afrinvest hinted however that buying interest in MTNN (+0.1%) drove a 6 basis points gain in the AFR-ICT index. On the flip side, sell-offs in ZENITH (-2.2%) and ETI (-5.9%) pushed the Banking index lower by 0.7% while the Industrial Goods index closed flat.

Investor sentiment, as measured by market breadth weakened to 1.0x from the 3.3x recorded previously as 19 stocks gained against 20 decliners.

“We expect a mix of bargain-hunting and profit-taking in the local bourse in subsequent trading sessions”, Afrinvest stated.