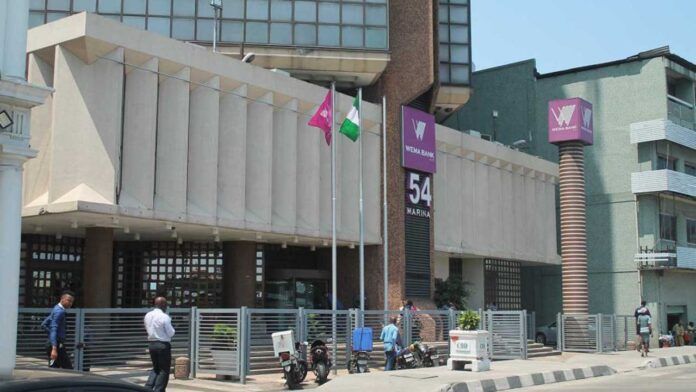 In general, the recent devaluation of Naira has a rub off effects on lender’s capital, at least by 18%. Wema Bank stock market worth in dollar term pitched at USD$61.111 billion.

The Central Bank of Nigeria in what it termed technical adjustment raised official foreign exchange rate from ₦305 to ₦360.

To be on a safe side, banks are expected to close this gap, having booked a revaluation gain through their income statement.

Coming from a low base, Wema Bank Plc achieved a double digit growth in its audited financial performance in 2019.

In the first quarter (Q1) of 2020, the low base effects seems to be dropping followed a moderate growth reported.

Meristem Securities had attributed this to, inter alia, the relatively low base in the corresponding period in the previous year.

In Q1 2020 results however reveal a significantly lower growth rate of +4.64% to ₦20.78 billion which suggests the diminished impact of a low base on growth.

Be that as it may, the growth in topline was supported by sustained expansion in interest earning assets, surged 5.09% year to date to ₦559.35 billion.

However, non-interest income on the other hand, recorded much slower growth of +2.85% to ₦3.88 billion on the back of the regulatory reduction in fees and commission.

Meristem maintained expectation of a moderated growth in 2020 on account of downside risks stemming from the COVID-19 pandemic, and the regulatory environment.

In particular, the implementation of loan forbearance to vulnerable sectors including Oil & Gas, Manufacturing and Agriculture, is expected to bear on interest income.

Cost inefficiencies, as observed by analysts further constrained lender’s profitability in the period.

Analysts think this is a positive development given the bank’s history of elevated interest expense.

Meristem noted that the bank’s increasingly costly funding mix, reflected by a further decline in current and savings account (CASA) mix to 39.00% as against 48.96% in 2019.

“We expect a significant rise in impairment charges in 2020 in view the anticipated economic contraction and the impact of a depreciating Naira on impaired dollar-denominated assets.

Going forward, Meristem expect a slow-down (if not a complete halt) in physical branch expansion activities due to the realities of COVID-19.

Analysts stated that this may reduce pressure on operating expenses and hence profit after tax.

However, the firm projects a slower top line growth and high impairment charges as a result of prevailing macroeconomic uncertainties are expected to bear on PAT growth.

It was observed the lender’s loans-to-deposits ratio (LDR) was below regulatory minimum.

Analysts stated that the shortfall in LDR, coupled with the official CRR hike resulted in a ₦49.37 billion CRR debit against the bank.

This may put a strain the bank’s liquidity position, analysts explained.

The bank’s total assets however remain relatively robust at ₦794.50, up 11.06% from the beginning of the year to date.

Meristem stated that a sustained faster-paced loan growth is required to meet benchmark.

However, analysts held that the persistent decline in capital adequacy to 11.60%, from 13.60% in 2019 reflects growth in risk assets which is expected to moderate in 2020.

Meristem remarked that Wema Bank’s continued asset expansion and digital banking focus is expected to bode positively for earnings in the medium to long term.

However, short term outlook is fraught with cost inefficiencies, regulatory headwinds, and the economic consequences of the COVID-19 pandemic.

This indicates an upside potential of +17.24%. Hence, analysts at Meristem rate the ticker a BUY.