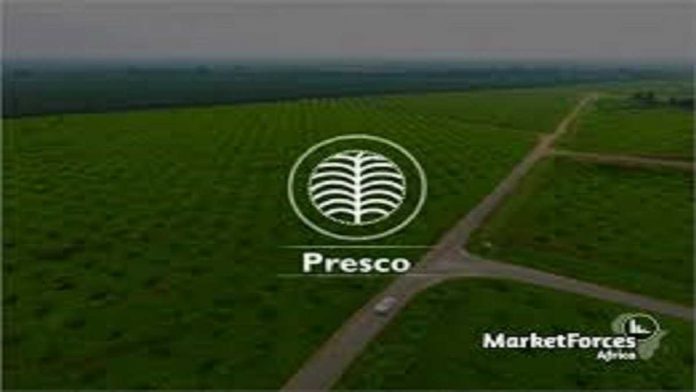 In an equity report, Meristem Securities hinted that despite an improvement from last year, PRESCO’s annualized return on equity of 17.86% lags that of its peers – OKOMUOIL return on equity printed at 23.17% – mainly as a result of a weaker net margin.

According the company’s financial statement, net margin closed at 22.02%, falling strongly behind 33.23% delivered by OKOMUOIL just as its asset turnover settled at 0.33x, again below OKOMUOIL 0.47x.

“Presco’s liquidity metrics pose a serious concern with current ratio of 0.79x, which is way below the industry average of 2.94x”, analysts at Meristem Securities stated.

The potential downside to Presco surfaced as analysts estimated the company’s 12-month target price to N70 per share, but the stock traded at N72 already.

Following a tepid performance, PRESCO posted strong double-digit demand growth as revenue jumped 21.13% year on year to NGN23.89 billion from NGN19.72 billion. Thus, the company outing indicated a revenue recovery from a 7.59% decline posted in the prior year.

For financial year 2021, Meristem Securities projected an earnings per share of NGN6.2, anchored on positive industry outlook as well as modest improvement in macroeconomic conditions.

Analysts at the firm set N70.22 target price for the company’s stock with the EPS projected applied with price earnings ratio of 11.30x.

Analysts explained that despite supply chain disruption and other logistic challenges thrown up by the pandemic, Presco’s revenue climbed to its highest level in six years, noting that the company benefited from an improvement in sales.

The improvement in demand, and then sales revenue was however driven restriction placed by the Central Bank of Nigeria (CBN) on access to foreign exchange for Crude Palm Oil (CPO) imports.

Further to that advantage, analysts added that policy directive with unintended benefits for the palm oil producer was the Federal Government’s decision to close the land borders, which effectively shut out smuggled alternatives and encouraged patronage of locally made products.

This provided local players with the latitude to increase product prices, Meristem Securities added. Noting that both directives, coupled with the company’s prior capital investments supported the improvement in sales over 2020.

For 2021, analysts at Meristem Securities said they envisage robust local demand for CPO and its derivatives against the backdrop of a gradual pick-up in economic activities.

“We also see support coming from the CBN’s decision to discourage CPO imports by withholding FX, as well as expectations of a much higher crude oil price environment in the year”, the firm added.

On risks to our outlook, analysts said they do not consider the reopening of the land borders a significant downside risk, given that the FG’s protection on local palm oil producers remains firmly in place.

Explaining the company’s performance, analysts said profitability metrics including its return on equity which came at 17.86%, and net margin of 22.02% remain quite attractive despite moderate increase in costs.

It was noted that both direct cost increased to NGN7.80 billion in financial year 2020 from NGN7.00 billion in 2019 and net operating expenses surged to NGN7.38 billion from NGN6.43 billion.

However, the company’s better financing mix lower pressure in the year amidst the pandemic threatening market operations.

Specifically, Presco’s total interest-bearing liabilities declined to NGN20.76 billion from NGN25.37 billion in the prior year as the firm paid down a portion of its debt.

As a result, analysts said the company’s finance expenses fell by about 10% to NGN1.92 billion while interest coverage ratio expanded to 5.50x from 3.81x as at 2019.

Also noteworthy is the CBN’s decision to reduce interest rates on its loans to 5% per annum effective March 2021, analysts added as they noted that this is expected to last for a year.

“We believe this would serve to moderate the company’s finance costs as these loans represent about 37.11% of PRESCO’s total borrowings in 2020”.

Finally, it was noted the company recognized a NGN1.85 billion gain on biological asset revaluation, further strengthening its bottom line.

Meristem Securities analysts explained that despite an improvement from last year, PRESCO’s annualized return on equity of 17.86% lags that of its peers -OKOMUOIL return on equity printed at 23.17% – mainly as a result of a weaker net margin.

Presco net margin closed at 22.02%, falling strongly behind 33.23% delivered by OKOMUOIL just as its asset turnover settled at 0.33x, again below OKOMUOIL 0.47x.

PRESCO’s liquidity metrics also pose a serious concern, analysts added, with current ratio of 0.79x, which is way below the industry average of 2.94x.