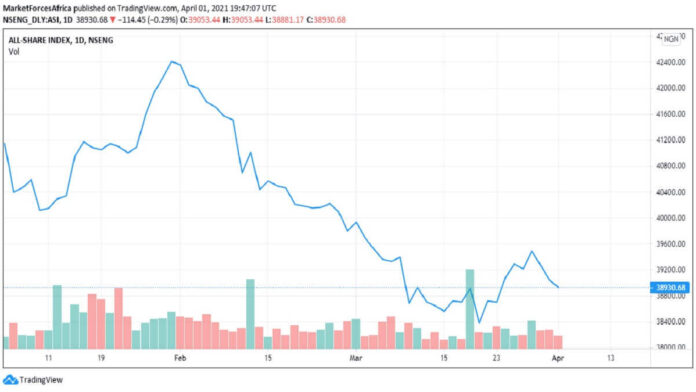 Stock market index extended its bearish run for the third straight session, with today’s loss stemming on the back of losses in some heavyweight names.

The decline was driven by price depreciation in well capitalised stocks amongst which are; Lafarge Africa, Zenith Bank, Stanbic IBTC, Guaranty Trust Bank and NEM Insurance.

Pressure was FTN Cocoa Processors shares which led the losers’ chart in percentage terms losing 8.70 per cent to close at 42k per share.

Notably, the NSE All-Share Index dipped by another 33 basis points (bps) to 38,916.74cpoints, a similar pattern to bearish trade recorded in March close.

Against that backdrop, stock market year to date loss expanded to 3.36%, while the market capitalisation declined to N20.361 trillion.

In its market report, Chapel Hill Denham said performance across its coverage universe was mixed, albeit with a bullish bias.

Precisely, only 2 of 5 of the firm’s coverage indices closed in the red terrain. The NSE banking and NSE industrial goods indices dipped by 362bp and 10bps, respectively.

The foregoing masked the gains recorded across the NSE insurance, NSE consumer goods, and NSE oil & gas, all of which rose by 19bps, 128bps, and 23bps, respectively.

The market’s activity was broadly bearish, with the total volume traded moderating by 31.04% to 239 million, while the total value traded also declined by 17.40% to N2.316 billion.

The tightening however reflects the impact of the Central Bank of Nigeria’s (CBN) open market operations (OMO) sale  worth N100 billion and net Treasury Bills sale of N49.2 billion, according to Chapel Hill Denham..

Analysts registered in a report that financial system liquidity was further tightened by provisioning by deposit money banks for the retail FX auction.

At the front end of the curve, the Treasury bills benchmark curve closed flat at an average of 3.82%, while OMO curve eased by an average of 4 basis points (bps) to 6.06%.

At the Treasury bill auction yesterday, the Debt Management Office (DMO) offered a total of N95.68 billion across three tenors, while demand was strong with a total subscription of N212.59 billion.

In related development, the Nigerian local currency, Naira, weakened against the United States dollar in the Investors and Exporters window, albeit marginally, by 15bps or 63 kobo to 409.30.

In the parallel market, the Naira strengthened by N1.00 or 0.2% against the dollar to 485.00. However, the exchange rate remained unchanged in the official and Secondary Market Intervention Sale (SMIS) segments at 379.00 and 380.69 respectively.

External reserves maintained the recent upward trend, but ended the month down by 0.8% month-on-month to US$34.8 billion on March 31st 2021.