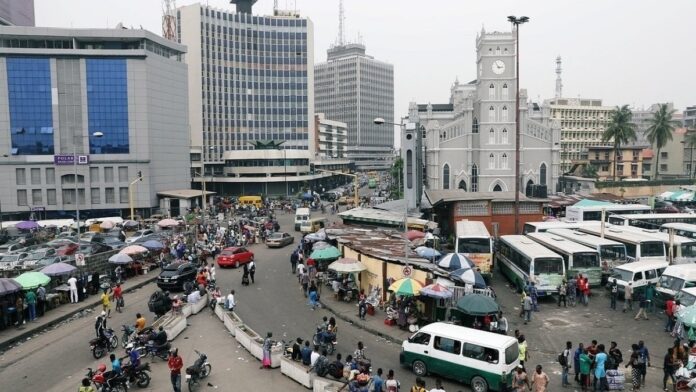 With paltry minimum wage of N30,000 (USD65), Nigerians are finding it difficult to breathe as Naira struggles to find true value amidst elevated prices of food items.

On Friday, Fitch Ratings affirms Nigeria ‘B’ with stable outlook, noting that the local currency naira remains overprice and may hamper external imbalances.

In a new report by the Ratings, it noted that Nigeria’s ‘B’ rating is supported by the large size of the economy, a low general government (GG) debt-to-GDP ratio.

The rating action is also supported by its small foreign-currency (FX) indebtedness and a comparatively developed financial system with a deep domestic debt market.

However, the rating is constrained by particularly weak fiscal revenue, comparatively low governance and development indicators.

These come in addition to Nigeria’s high dependence on hydrocarbons and continued weak growth and high inflation. Critics believe that Nigeria’s misery index worsens for lack of strong policies strategy and overconcentration on oil as key source of revenue.

Nigeria continues to contend with external liquidity pressures that were magnified by the 2020 pandemic-related shock and resilience to adverse external developments is weak.

Despite gradual and moderate exchange-rate depreciation over the last year, the naira remains overvalued.

Persistent double-digit inflation under a tightly managed multiple-window exchange-rate regime could drive further misalignment of the currency relative to fundamentals.

It said currency overvaluation will hamper a correction of external imbalances.

Youth Unemployment at an All-time High

In its commentary, Afrinvest summaries the highlights of the Nigerian Bureau of Statistics (NBS) labour statistics for Q4:2020, noting that youth unemployment hit an all-time high in Q4.

According to the report, unemployment rate in Nigeria worsened to 33.3% in Q4:2020, from the 27.1% reported in Q2:2020, representing the worst performance on record since the reporting of quarterly data began in 2010.

It noted that this decline in the labor force, despite a 4.3% increase in the working-age population to 122.0 million, implies that more people have lost interest in job search.

On the flip side, underemployment rate declined to 22.8% in Q4:2020 from 28.6% in Q2:2020. Since the economy reopened in Q2:2020, analysts at Afrinvest said they had expected the pick-up in economic activities to boost labour market performance.

“This is alarming considering the Federal Government’s effort in boosting youth employment, particularly the most recent ₦75.0 billion Youth Investment Fund that aims to generate 500,000 jobs by 2023.

With the associated effects of the pandemic, poor foreign direct investment (FDI) flows and unfavorable macroeconomic conditions, significant improvement in employment may not be a walk in the park, it added.

In addition, the investment firm said government appears to lack the necessary creativity and capacity in using data to design job elevation programs for the Nigerian masses.

The Consumer Price Index (CPI) data for February as released by the NBS reveals an unrelenting uptrend in the headline inflation rate for the 18th consecutive month as it rose to 17.3%.

The food basket remained the pressure point for headline inflation, rising year on year to 21.8% in February from 20.6% the previous month.

The month on month data however revealed a slower pace of increase as the food index rose marginally by 6 basis points (bps) to 1.9%.

“We believe that the sustained insecurity in the food-producing regions of the country, the farmer-herder clash, and the recent blockade of food-conveying trucks from the north fueled the increase in food prices, especially considering that food inflation moderated in January.

Core inflation also increased 53bps in February to 12.4%, the highest analysts at Afrinvest said they have seen since June 2017.

The month on month trend however signifies a slowdown, moderating 5bps to 1.2% in February as the effect of the increased electricity tariff wears out.

“We believe the risks to inflation remain on the upside over the mid-term. Food prices would continue to pressure headline inflation as we have exited the harvest season.

“This is especially as food insecurity issues abound amidst unrelenting farmer-herder clash and may disrupt planting season.

“We may also see increased pressure on core inflation if a new pricing template for PMS is adopted amidst higher crude oil prices”, Afrinvest said.

Nigeria’s long-standing current account (CA) surplus shifted to a deficit of 4.2% of GDP in 2019, driven by a fast rise in imports.

Fitch estimates a stable current account deficit of 4.2% of GDP in 2020, as import compression from domestic demand contraction and restrictions on FX access offset a slump in hydrocarbon exports and remittances.

Nigeria’s current account deficit is projected to narrow to an average of 1.6% of GDP in 2021-2022, much smaller than the forecast average median of 4.3% for the ‘B’ rating category, supported by the recovery in oil prices.

It was noted that downward pressures on the naira and continued current account deficits could strain international reserves, amid a subdued outlook for FDI and portfolio inflows.

“At their current level, international reserves would cover five months of the forecast current account payments in 2021, better than the forecast ‘B’ median of 4.2 months”. Fitch said.

The Central Bank of Nigeria (CBN) estimates it has cleared through spot and forward FX sales most of the backlog of FX demand by foreign portfolio investors, which it evaluates at around USD2 billion.

However, Fitch believes a backlog of FX demand for imports and capital repatriation will still constitute a sizeable drain on reserves should FX supply normalise.

Fitch said the outlook for public finances is mostly a function of oil revenues, given the low level of non-hydrocarbon fiscal receipts, while there is little leeway to further reduce spending.

“We foresee little progress on boosting tax revenue in the medium term due to compliance issues, administrative capacity challenges and resistance to the phasing out of tax credits”.

It said the improvement in the fiscal deficit will be driven by the rebound in oil prices to well above the level assumed in the 2021 budget and the revival in economic growth.

A US$10 change in the oil price per barrel relative to Fitch’s baseline would affect the general government balance by around 0.5% of GDP.

Meanwhile, Fitch estimates that a 10% change in annual average oil production would impact the government deficit by 0.3% of GDP.

Social resistance to the ongoing reforms of costly energy subsidies raises risks to our budget forecast, as similar reforms have been reversed in the past due to social pressures.

The government has so far held to its March 2020 commitment to the full elimination of the implicit fuel-price subsidy, but retail prices are yet to be adjusted to the rise in benchmark prices in 2021, which could mark a de facto return of the implicit subsidy.

Stiff labour union opposition has also delayed a further adjustment of electricity tariffs, which are unlikely to reach cost-recovery levels in 2022 as targeted by the government, in our view.

The agency said government debt-to-revenue ratio will rise to 395% in 2022 on its forecasts, versus a forecast ‘B’ median of 325%.

The picture is much weaker at the federal government (FGN) level, with forecast debt-to-revenue and interest-to-revenue ratios of 1,031% and 64%, respectively, in 2022.

It said the government has plans to securitise the loans it contracted under CBN’s Ways and Means (W&M) facility in recent years.

Government borrowing from the CBN since 2015 has led to the accumulation of a NGN13.2 trillion (8.6% of GDP) balance under the W&M facility end-September 2020.

“This represents around 28% of the total public debt stock, by our estimates”, Fitch stated.

It added that repeated recourse to large central bank financing could complicate macroeconomic management and hinder the central bank’s ability to tame inflation, particularly if it exceeds limits set under existing institutional safeguards, in our view.

Fitch recognised that the authorities have not solicited any relief under the G20’s Debt Service Suspension Initiative (DSSI), saying the benefit from joining the initiative in 2021 would be small.

“We do not expect the government to request any debt relief under the G20’s Common Framework as the authorities attach high importance to access to international markets”, it added.

Meanwhile, for the country, Fitch stated that average growth in 2020-2021 will be in line with rating peers.

“The recovery will be held back by FX scarcity, infrastructure gaps, electricity outages and security-related disruptions. The long-awaited Petroleum Industry Bill is currently being examined by parliament.

“If approved, it could improve the medium- to long-term outlook for investment in the oil sector, which continues to be clouded by insecurity and governance challenges”, Fitch stated.

“The headline rate has exceeded the central bank’s 6-9% target range since mid-2015 and figures released earlier this week showed that inflation jumped to a four-year high of 17.3% in February.

“Meanwhile, the economy contracted by 1.9% last year, the steepest downturn since 1993. Unemployment rose to 33.3% in Q4 of 2020, noted to be the second highest globally according to Bloomberg.

“We suspect that stagflation in Nigeria is the by-product of policy preferences that the authorities seem determined to stick to.

“Chief among them is keeping the currency stable. Policymakers’ reluctance to let the naira weaken means that it remains overvalued. Indeed, the currency trades over 20% weaker on the parallel market.

“A large gap between the official and black market rates has probably contributed to high inflation as traders using the parallel exchange have increased the price of imported goods”, the firm stated.